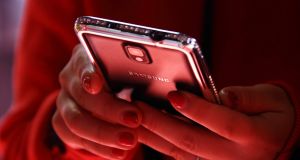 The company, which recently welcomed Taoiseach Enda Kenny to its AstroTurf-clad new Dublin office, says mobile traffic to its sample of Irish e-commerce sites jumped 64 per cent year on year.

All devices are growing their levels of traffic, but mobile is simply growing at a faster rate. It now accounts for a 37 per cent share of traffic, up from 29 per cent, while tablet’s share has stood still at 17 per cent – kept in check, perhaps, by the decline in iPad sales.

Although the share of traffic to e-commerce sites held by desktop (including laptop) has decreased from 54 per cent to 46 per cent, it’s still “holding its own”, says Coleman. “The desktop enjoys a captive audience between 9am and 5.30pm and the laptop is still the sofa and bed device of many.”

E-commerce spending, meanwhile, is increasing much faster than traffic, with Wolfgang’s sample enjoying a 62 per cent surge in spending.