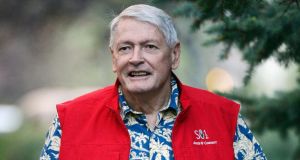 US-based cable TV giant Liberty Global is conducting due diligence on Irish terrestrial broadcaster TV3 with a view to buying the business.

According to informed sources, Liberty Global is well advanced with the process but a deal could still be months away, especially as it would require regulatory and ministerial clearance.

Mr Malone has also invested heavily in property in Ireland in the past few years.

This has included buying a number of leading hotels, including the five-star Westin in central Dublin, the InterContinental in Ballsbridge, formerly known as the Four Seasons, and the Limerick Strand Hotel.

It is not clear why Liberty would want to acquire TV3, although the US company has a small shareholding in UK broadcaster ITV.

It could view the acquisition of TV3 as a means to boost its flagging performance on television subscribers in Ireland, which is lagging behind Rupert Murdoch’s Sky.

No comment was available last night from either TV3 or Liberty Global.

It is not clear how much TV3 might fetch, but reports have suggested a price between €120 million and €150 million is being sought by its owners.

The sale of the broadcaster is being handled by London- based corporate adviser Quayle Munro.

TV3 is controlled by British private equity group Doughty Hanson, which paid €265 million for the business in 2006.

It has been on the blocks for a number of months. Businessman Denis O’Brien, who has extensive media interests in Ireland through his shareholding in Independent News & Media (INM) and his ownership of a number of radio licences, has also been linked with a bid for TV3.

Earlier this week, a spokesman for INM said it was “highly unlikely” it would bid for TV3.

In addition to its main TV3 terrestrial channel, the Ballymount-based company also broadcasts 3e and and the TV3+1 replay station. It also has a player service and a website, TV3.ie.

The reduction in turnover reflected a decline in advertising sales that year, a hangover from the crash of 2008.

It is understood the broadcaster is enjoying a good year, helped by strong interest from advertisers for the Rugby World Cup, which TV3 will show exclusively in Ireland from mid-September.

All of the slots made available so far to advertisers have been snapped up.

TV3’s ratings have also held up well in the face of UTV Ireland’s debut this year and the loss of British soaps Emmerdale and Coronation Street to the Belfast company.

In particular, the station’s new drama Red Rock has performed well since airing for the first time this year.

In 2013, TV3 refinanced its loans, acquiring its €52.6 million debt from the liquidators of Irish Bank Resolution Corporation at a saving of €8.9 million. It was financed with a €37 million loan from Bluebay Ireland Corporate Credit Ltd and €7 million from a Doughty Hanson entity.