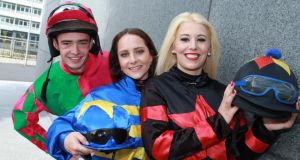 Like their counterparts in film, television executives are not stupid: for their annual spring marketplace, they descend on warm and sunny Cannes.

Representatives of Irish broadcasters and more than a dozen independent Irish production companies have visited the French Riviera this week for MIPTV hoping to make sales for their programmes and formats.

Ahead of the event, Co Galway’s Abú Media sold its TG4 reality format Jockey Eile , now renamed Jockey Stars , to distributor Eccho Rights, which brought it to the attention of the international broadcasters present at MIPTV. The first series of the IFTA-winning Jockey Eile aired on TG4 last year and a casting call has been made for the second.

Among the other Irish production houses, Vision Independent Productions managing director Philip Kampff said both Operation Transformation and The Hit were “generating a lot of interest”.

While weight-loss format Operation Transformation has long been a ratings banker for RTÉ, songwriter-focused music competition show The Hit , which is being distributed by Warner Bros International, was piloted on RTÉ Two last year with a full series due to air in the summer.

Sideline, the producer of the forthcoming Great Irish Bake-Off for TV3, is showcasing a number of formats including gymnastics elimination series The Floor , hidden camera series Tour de Farce and the quiz Head Count . It will also be touting its growing factual slate in the shape of Tales of Irish Castles , a six-part documentary series fronted by actor Simon Delaney, and Print and Be Damned , a four-parter presented by Donal McIntyre that examines major events in Irish newspaper history.

Broadcasters, meanwhile, are buying as well as selling – TV3 Group’s new director of content Jeff Ford was quoted in The Hollywood Reporter as saying the channel was looking for easily-localised formats that offer the Irish viewer “a little bit of hope”.