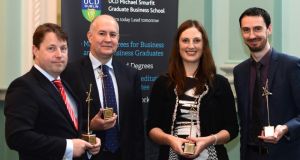 The Irish Times has won four of the categories in the UCD Michael Smurfit Graduate School of Business wards for business journalism.

Mark Paul and Ciarán Hancock won the Business News category for their piece on Sir Anthony O&#8217;Reilly, described by the judges as “a brave and difficult piece while showing how well Mark and Ciarán work together”.

The judging panel felt that his work displayed excellent research and variety, were very well written and of great public interest. His arguments presented an unusual view and different angle. He is also the editor of The Irish Times business section.

Pamela Newenham won the Technology Reporter category. The judges deemed her entry entitled ‘The robots are coming’, which was about the advances of robotic technology, to show superior skill and depth of reporting.

Simon Carswell, The Irish Times’ Washington correspondent, won in the Business Interview category for his interview with John Rusnak, the former US currency trader who cost AIB $691 million.

The interview was described by the judging panel as giving an illuminating insight into the man who’s multi-billion dollar bets on currencies ultimately cost AIB $691 million in 2002. Securing this interview was viewed as a coup by the panel, offering unique and revealing insights on Mr Rusnak’s time in prison and his view on life.

In addition, three other business journalists from The Irish Times - Barry O’Halloran, Tom Lyons and Karlin Lillington - were shortlisted.

In addition to the seven category winners, the UCD Smurfit School Alumni Choice Award was presented to Emmet Ryan of the Sunday Business Post. The event is sponsored by Eircom.