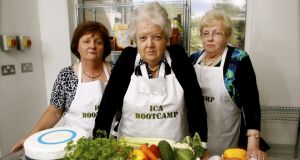 ICA Bootcamp: The entertainment series is no longer on RTÉ, but it is being sold overseas as ‘Granny Bootcamp’

“This is where we show off our wares,” says Edel Edwards, head of programme sale for RTÉ Global, of the MIPTV marketplace, which is held every April in Cannes. The event, coupled with October’s even bigger Mipcom, is the highlight of her calendar. “It’s almost like Paris Fashion Week for international TV,” she says. “The scale of it is phenomenal.”

The “world’s market and creative forum for content on every screen”, which takes place from next week, is massively important for Irish broadcasters and producers. In what Edwards says is “kind of like an Irish pavilion”, RTÉ will exhibit next to Enterprise Ireland’s “Ireland on Screen” group stand, run in association with the Irish Film Board, which will feature 16 established companies and high-potential start-ups.

“The aim is to assist Irish companies to internationalise,” says Enterprise Ireland development advisor Eileen Bell. In short, this is about exports. “Ireland is viewed as an emerging and innovative content creation hub,” Bell says.

“The days of having one single broadcaster commission 100 per cent of a series are almost gone. Now you have to go off and find additional partners,” says JAM Media chief executive John Rice, who is looking for finance for four pre-schooler shows in development: Early Bird, Pigsticks and Harold, Nessy and Nelly and Little Roy, a younger version of its RTÉ / CBBC series Roy.

With about 12,000 attendees from more than 100 countries descending upon Cannes for the four-day marketplace, it’s not a question of waiting for passing trade. Most delegates’ diaries will be full up with pre-arranged back-to-back meetings before they land, leaving little time to check out such keynote speakers as Kim Cattrall and Amy Poehler.

TV3’s resident hypnotist Keith Barry will be hosting “a number of lunch and breakfast meetings” as he bids to bring his show Brain Hacker to the attention of the wider world, while the commercial broadcaster will also showcase its game show co-productions The Lie and Crossfire at the event. The Lie is in the process of being bought by French and Spanish broadcasters, while Crossfire will be screened in Cannes through the UK distributor DRG.

“It’s hugely, hugely competitive,” says RTÉ’s Edwards. “Our stands are pretty small compared to some others. The likes of the Warners, the Disneys and the Fremantles, their stands are the size of a small house.”

But the fact that the whole industry congregates in one place is also the advantage of Cannes for broadcasting executives working on either sales and acquisitions. “We don’t have the opportunity to go to Australia, or New Zealand, or the US just by hopping on a plane,” says Edwards. “We can use this to introduce anything new on the RTÉ slate that we think will have international appeal.”

On this occasion, that means factual programmes including Jigs & Wigs and Class Swap. RTÉ Global’s brochure is led, however, not by finished series but by format ideas such as Whose Holiday is it Anyway? and The Speech that were developed through RTÉ’s Format Farm pilot scheme. Formats like Operation Transformation and The Hit have already notched up international sales, meanwhile, but more would always be nice.

One veteran of the Format Farm is Independent Pictures, which made The Give or Take Club, a community experiment show that will be represented at MIPTV by Endemol’s distribution wing. “We’re hoping that we will see some interest in it,” says Independent’s managing director Conor Moloney. Social experiment formats were “a big trend” last year and he expects this will be repeated in 2014.

The company has two other formats with distributors attached: Taxi, a series commissioned by RTÉ Two’s factual department and ICA Bootcamp, a former fixture of the RTÉ Two schedule featuring household skills mentors from the Irish Countrywomen’s Association.

ICA Bootcamp is sold overseas by DRG as Granny Bootcamp, and has been optioned in France, Spain and the Middle East. A “fantastic Spanish promo” has been made and “might open up South America and Hispanic North America” to grandmotherly advice.

Cannes will be “much more about building relationships than about doing actual business”, according to Moloney. But the support of Enterprise Ireland is critical, he adds, as having a physical presence at the Palais des Festivals building “does lend credibility without a shadow of a doubt”.

1 Coronavirus: Irish holding back on holiday plans
2 Bank leaked my loan request to family who tried to rip me off
3 When the Chemistry no longer works – the closing of a leading Irish ad agency
4 Solar panels: Are they worth the investment?
5 Can I see my father’s previous wills?
6 New Irish commercial property website goes live
7 Eason acquires rival Dubray Books for undisclosed sum
8 Accumulated profits at David McWilliams’ media company hits €675,000
9 Ryanair and Aer Lingus monitor impact of coronavirus on travel to Italy
10 Fuel company loses €1.35m challenge over tax bill in ‘green diesel’ case
Real news has value SUBSCRIBE