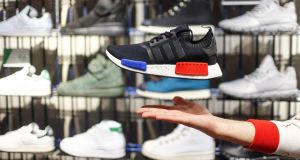 Adidas: The German shoe and sportswear company has been hard at work pumping money behind a very particular problem: it’s not as cool as it used to be. Photograph: Reuters/Hannibal Hanschke

Is Adidas cool? As a recent convert to the brand, I have a vested interest. But because I’m not a teenager, my conscious thinking process when picking up a pair of Adidas Gazelles didn’t go far beyond “these look nice... Please don’t turn my feet into sponges when it rains”.

It turns out I was unwittingly on the receiving end of a very clear campaign by Adidas and not making a spontaneous consumer decision at all. The German shoe and sportswear company has been hard at work pumping money behind a very particular problem: it’s not as cool as it used to be.

To correct this misfortune – an affliction that is hurting it specifically in the all-important US market – a flurry of Adidas Originals fashion styles have been launched onto the world’s retail racks.

The “vintage classic” Gazelles that lured me are one of many sub-brands deployed in a new fight for revenue that’s going to be a marathon not a sprint, according to its recently jettisoned chief executive.

There’s nothing quite like a “retro” design to remind everyone that your heyday was 40 years ago, then turn that into a positive. The 1970s were almost as good a time for Adidas as they were for cheating athletes, and here are the suede size-fives to prove it.

Even before the BBC’s report this week that Adidas is to end its sponsorship deal with athletics body IAAF early, the company was having an interesting 2016. News that Kasper Rorsted, boss of soap maker Henkel, was taking over as chief executive sent its shares up 12 per cent. Rorsted, investors reckoned, was the man who could revive Adidas, restore its three stripes to glory and send its stock soaring in a Nike-like swoosh.

But it is its apparent decision to sever its relationship with the IAAF, yet to be confirmed, that naturally gives the company top billing. To try to cut a multi-million sponsorship deal short by years, rather than simply let it expire, is the kind of move that attracts stadiums of lawyers.

To recap, earlier this month the second of two damaging reports into athletic doping scandals concluded that “corruption was embedded” at the IAAF under former president Lamine Diack. Adidas, its biggest sponsor, is then said to have sent termination letters to IAAF and its commercial partner Dentsu.

It’s a dramatic departure from the usual corporate silence. “Advertisers Threatening To Pull Money Now The Only Remaining Way To Effect Any Change” declared satire site The Onion in 2014. Its joke had a downbeat conclusion: “While noting that advertisers alone possess the power to inspire progress, the report went on to confirm that such companies rarely, if ever, actually follow through on their threats.”

Is this the moment they do? Last year’s Fifa corruption scandal now looks like a test run for this deeper schism between sponsors and sports rights holders. The curt sponsor statements that followed a string of arrests at the football body were in themselves a break from the see-no-evil diplomacy that typically governs such high-level “partnerships”.

Adidas, it has been pointed out, subsequently extended its relationship with Fifa – until 2030, no less. Its critics say football is more commercially important to Adidas and that’s why it was less vocal on Sepp. But the two scandals are not the same.

Fifa’s concerns the bureaucracy of football. The IAAF’s doping and cover-up scandals go to the heart of the sport for viewers. How can they believe what they see? The disgust is written all over the faces of the clean athletes. The winners must defensively restate their honesty.

Now Adidas appears to weigh the risk to its own reputation so seriously, it can’t run away fast enough. Yes, it may want to save a few tens of millions after its big outlay on both Fifa and a pricey Manchester United deal. And it will likely still continue to sponsor individual athletes, knowing they can always be cut loose if they get caught.

It can also keep chasing the endorsements of pop stars in possession of varying levels of cool: Kanye, Rita Ora, and the rest. But both the bright fashion styles that catch my eye and these celebrity lines are on the fringes of its core sports footwear and clothing business. Adidas needs sport.

What Adidas doesn’t need is the IAAF. By severing ties now, it gains first mover advantage. It gets to claim highly marketable qualities like integrity and fairness for itself and say that those things, at least, are cool. Still, let’s hope it’s not expecting a medal for it.