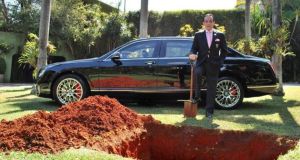 Eccentric billionaire Chiquinho Scarpa ruffled more than a few feathers in his native Brazil recently when he announced plans to bury his beloved Bentley.

The businessman said he would bury his $500,000 luxury car - a black Bentley Flying Spur- so that he could drive it in the afterlife.

62-year-old Scarpa said he had been inspired after watching a TV documentary on the Egyptians, who were buried with their most precious belongings.

He posted photos of himself on Facebook using a mechanical digger to unearth a suitable resting place for the car at his palatial compound in Sao Paul .

Needless to say, the plan drew an avalanche of criticism on social media, with people labelling him as cruel, elitist and downright insane.

Poverty campaigners savaged him for his “wasteful lunacy”, saying that the car could have been donated to charity.

Undeterred, Scarpa - whose vast family fortune includes everything from steel to chinaware, plus huge real estate holdings - announced a date for the burial of his prized possession, inviting the country’s media to attend.

Just as the car was about to be lowered into the ground, Scarpa called an abrupt halt to proceedings.

He told the assembled media: “I have not buried my car. Everyone thought it absurd when I said I’d do it. It is absurd to bury bodies, which can save many lives. Nothing is more valuable. Be a donor, tell your family”.

The whole escapade had been an elaborate publicity stunt to promote the start of organ donation week in Brazil.

Scarpa went from zero to hero in an instant, lauded the world over for rowing in behind such a worthy cause.

The plan had been concocted by ad agency Leo Burnett Tailor Made on behalf of Brazil’s organ donation authority.

Last week “Bentley Burial” received top prize in the promo and activation category at the Golden Lion awards in Cannes - the advertising equivalent of the Oscars.

And who said advertisers had lost their creativity.