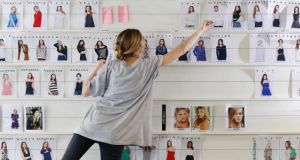 Consumers in the UK are four times more likely than Irish consumers to buy groceries online, the French are twice as likely to buy make-up on the internet and Irish shoppers are keener than those in other countries to browse multiple brands before committing to a clothing purchase.

When it comes to buying home appliances, the Irish are also notably fonder of a practice known as “reverse showrooming”, where they research a purchase online before heading into a physical shop to have it rung up a till the old-fashioned way.

Irish and French people are also more likely than consumers in other western European countries to say a recent clothing and footwear acquisition was “purchased for self”, while the Germans are more likely than others to say their reason for buying an item in this category was “based on urgent need”.

The Irish and the Portuguese, meanwhile, are more likely than their western European counterparts to say they buy make-up “for a special occasion”.

These are just some of the insights into shopping behaviour that can be gleaned from Google’s consumer barometer 2014, a free online tool based on a TNS survey of more than 150,000 people across 46 countries.

Although Irish consumers have an average of 3.1 connected devices, much of the survey data tallies with other evidence that suggests Ireland is less enamoured with e-commerce than our nearest neighbours in the UK.

The Google tool, which has been expanded to include more countries and findings, is designed to provide marketers with digital consumer insights to support planning. As well as examining shopping behaviour within 10 product categories, it explores digital viewing habits such as multi-screening and consumption of online video.

“Irish consumers are online and loving the experience, while many Irish businesses are still playing catch up,” says Google Ireland head of sales Cera Ward.

“The research also shows that the Irish online consumer is unforgiving.

If issues are encountered while accessing websites via a smartphone, a quarter will find another site that works better rather than trying on another device.”

The tech giant’s research team say they run consumer surveys to “add context” to the information that can be elicited from its search engine query trends.

1 Ireland has fifth-largest number of billionaires per capita in the world, says Oxfam
2 Companies should not use the climate crisis as a scapegoat
3 Chris Johns: Ireland risks populist culture war over property and pensions
4 Irish rents see second-highest increase in the EU since 2007
5 PTSB finance and operations executives vie for chief executive job
6 Boeing’s 737Max will fly again in 2020, Avolon predicts
7 State-backed Finance Ireland weighs stock market flotation in 2020
8 Mincon acquires Finnish company Lehti for €8m
9 Ireland ranked second in Europe for data breach notifications
10 ‘The only time I saved money was some coins in my first piggy bank’
Real news has value SUBSCRIBE