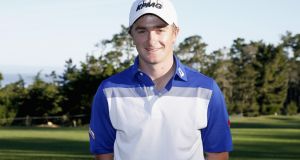 The details of the sponsorship have not been disclosed but it is thought to be worth a six-figure sum over the period to the 23-year-old from Greystones, Co Wicklow, based on certain targets being met.

KPMG’s brand will now appear on the front of Mr Dunne’s cap and he will also undertake a number of appearances at corporate days for the firm .

Speaking to The Irish Times yesterday before starting a practice round for this week’s AT&T Pebble Beach Pro-Am tournament, Dunne said he was “excited” to partner with KPMG.

“I hope in representing the brand that I will shine a good light on their company,” he said.

“I’m hoping that this is just the start and that it can become a long-term relationship.”

Dunne became the first amateur in 88 years to lead the British Open championship after 54 holes.