Jeremy Clarkson, Richard Hammond and James May to launch Drivetribe in November 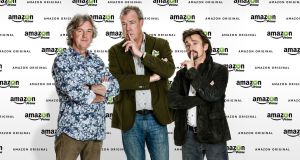 James May, Jeremy Clarkson and Richard Hammond announcing their new motoring show on Amazon, The Grand Tour. Breyer Capital and Atomico are among the investors in Drivetribe, the trio’s social network and publishing platform for car enthusiasts. Photograph: Amazon/PA Wire

Former Top Gear hosts Jeremy Clarkson, Richard Hammond and James May have raised $5.5 million in a Series A round for their new digital media startup, Drivetribe, led by Breyer Capital along with European investor Atomico and others.

Drivetribe – a social network and publishing platform for motoring and auto enthusiasts – is slated for a November launch, and will focus on video articles hosted by Mr Clarkson, Mr Hammond, and Mr May along with user-generated blogs and discussion forums.

The company claims to use machine learning to tailor content for the most interested audiences, and to trial different headlines to maximise engagement via social media. Mattias Ljungman, partner at Atomico, said he was betting on the startup because of the celebrity founders’ “grasp of the sector, the loyalty they command, and the tech talent they’ve assembled”.

The London-based startup plans to launch its product as both an app and a site in the autumn.