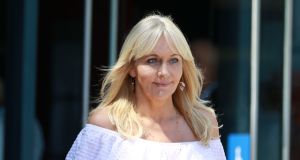 Miriam O’Callaghan: the broadcaster has nothing to do with the skincare range and is distressed at being associated with what she says is a scam product. Photograph: Nick Bradshaw

Broadcaster Miriam O’Callaghan has obtained High Court orders allowing her to join as co-defendants 51 people allegedly connected to Facebook advertisements using her name and image which she says are defamatory.

The intended defendants have been identified following a court order by Facebook, which, along with Instagram, was used to host pages with advertisements containing allegedly defamatory statements about her in order to sell skincare products.

The advertisements used attention-grabbing false headlines such as “Miriam sacked from RTÉ” which results in the ads appearing in Facebook users’ “news feeds”, it is claimed.

When the user clicks on the ads, he or she is directed to pages on which the user is encouraged to buy skincare products falsely stated to be endorsed or owned by Ms O’Callaghan, it is claimed.

Ms O’Callaghan has nothing to do with the skincare range and is distressed at being associated with what she says is a scam product. A number of Irish people had been victims of this false advertising and had to cancel their bank cards after ordering a “free trial” in the advertisements, it is claimed.

Ms O’Callaghan initially brought her proceedings against Facebook Ireland and sought orders, which were granted by the court on April 5th, requiring the social media company to provide basic subscriber information, payment method details and business manager account information about those behind the adverts.

When the case returned before Ms Justice Leonie Reynolds on Tuesday, she was told Ms O’Callaghan’s lawyers had identified 51 individuals/names which she wishes to have joined as co-defendants with Facebook.

The information provided by Facebook identified 18 creators of payment accounts and another 33 administrators of those accounts, who were identified by username. Certain of the administrators seem to have had access to several of the accounts that paid for the offending advertisements, Paul Tweed, solicitor for Ms O’Callaghan, said in an affidavit.

The majority of the physical addresses linked to these 51 names are in Belgrade in Serbia and the towns of Bar and Berane in Montenegro. Others are in the districts of Flushing, Jamaica and Maspeth in New York, in the United States. Their email addresses are also given.

Paul O’Higgins SC, for Ms O’Callaghan, told Ms Justice Reynolds that, assuming they are all real people, these were the addresses and names who emerge on the advertising account details provided by Facebook on foot of the court’s previous order.

Ms Justice Reynolds granted orders allowing those named to be joined as co-defendants. She also granted permission to serve notice of the defamation proceedings on them by way of non-personal “substituted” service through ordinary pre-paid post at their physical addresses and by email.

She adjourned the matter to next month.