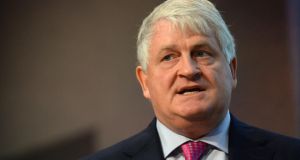 Denis O’Brien: ‘I believe that every citizen is entitled to privacy in their financial affairs.’ Photograph: Dara Mac Donaill / The Irish Times

Businessman Denis O’Brien said he was “delighted” after winning a High Court injunction on Thursday against RTÉ preventing the broadcast of a news report about his debts to the State-owned bank IBRC.

The bank has also secured an injunction against the broadcaster in relation to the proposed report, which was to have included information that was also contained in legal advice drafted by the bank’s solicitors.

It will not be legally possible to report the judge’s reasoning for his decision or his conclusions on the case until at least Friday, June 5th.

Reporting restrictions will remain in place until then, while lawyers from both sides agree on a series of redactions to the version of the written judgment, despite the judge’s reasoning being read to open court yesterday.

RTÉ said it was “disappointed” by the judge’s decision.

Mr O’Brien, who had argued that he was entitled to his privacy and that his relationships with other banks would be damaged by the report, said he took the case “to protect my rights as a citizen”.

“I believe that every citizen is entitled to privacy in their financial affairs. RTÉ came into possession of highly selective illegally obtained documents and took a decision to attempt to broadcast the details,” he said.

The proposed story was partially based on a letter written by Mr O’Brien to IBRC liquidator Kieran Wallace in 2013 in which he asked for more time to repay his loans, which had expired.

This can be reported because the information was revealed to the Dáil by Independent TD Catherine Murphy, who has expressed concern at the injunction.

Senior counsel Michael Cush, representing Mr O’Brien, told the court during the hearing that the letter contained “precise information regarding his historical debts, the repayments he had made, and the balance” due to the bank.

Flights in State’s airspace collapse to 1980s levels 15:34
‘We have something we should really be proud of in regards to how we treat children’ 14:50
Government’s remote working plan hailed as ‘ambitious vision’ but caution urged 13:18
Examiner asks for Norwegian Air company to be wound up 13:17
Part of Revenue’s customs system failed on two days this week 12:55