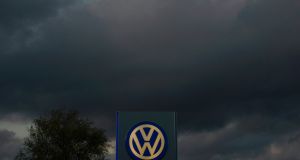 Bleak outlook: Volkswagen’s US fines could be 15 times the $1.2 billion Toyota was obliged to pay up last year. Photograph: REUTERS/Fabian Bimmer/Files

“We have totally screwed up,” said Michael Horn, head of Volkswagen’s US division. But Volkswagen’s screw-up isn’t just any screw-up. It cheated at something it was supposed to be good at: environmental credentials.

Slogans like “if only everything in life was as reliable as a Volkswagen” now ring very hollow.

The German carmaker is not the first company to have its brand claims so clearly and decisively exposed by news headlines.

In 1910, a White Star Line publicity brochure claimed the Titanic was “designed to be unsinkable”. That turned out not to mean the same thing as being unsinkable.

Somewhat more recently, after a string of recalls, the Toyota slogan “best built cars in the world” started to seem grimly ironic.

An “unintended acceleration” problem in some of its vehicles, linked to fatalities, resulted in a US congressional grilling and the company was forced to admit it had made “misleading public statements” about the safety of its cars.

But Volkswagen’s dishonesty was not just confined to the cover-up. This scandal, which has become known as the “diesel dupe”, centres on a deliberate intention to mislead. No wonder the company is now begging for consumers to trust it again. Its move to hire the lawyers who represented BP during its oil spill crisis is a pointer to the depth of its predicament.

Indeed, Volkswagen has only one real advantage over BP and other oil companies at this stage: its pollution of the atmosphere is unlikely to produce such bang-to- rights photographs as the archetypal rare bird with feathers coated in black. Its particular contribution to environmental damage will be harder for the media to illustrate.

The future drip-feed of updates about criminal investigations and legal claims is likely to get in the way of that PR strategy, however.

And then there’s the cold, hard cash. Volkswagen’s US fines could be 15 times the $1.2 billion Toyota was obliged to pay up last year.

But beyond this financial drain, the German company will now have to spend valuable time and energy to fix a broken brand rather than grow and strengthen a solid one.

One company in the transport business that is slightly further down the line of brand rehabilitation is Malaysia Airlines, now led by former Aer Lingus chief executive Christoph Mueller.

The airline has restructured itself in the wake of a tragic 2014, in which it lost two aircraft in unusual circumstances. It has hired advertising agency M&C Saatchi, which is said to be planning a “sensitive” campaign for the relaunch.

The problem for Volkswagen may, ultimately, be very similar to the one facing Malaysia Airlines: competition. In the fight for customers they will be battling rivals with brands less tarnished than theirs.

Their reputational edge has gone.