Buzzfeed to use $50m investment to fund new ventures 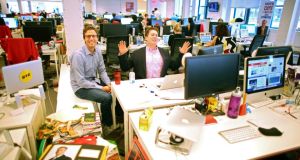 Here are three insights about BuzzFeed, the viral content startup: 1. BuzzFeed is a web traffic sensation that draws 150 million average monthly viewers. 2. Numbered lists, like this one, are what the site is most famous for and drive much of its audience. 3. BuzzFeed wants to be known for much, much more.

To help make that happen, BuzzFeed just closed a new $50 million investment from Andreessen Horowitz, a prominent venture capital firm in Silicon Valley. The investment values the company at $850 million, according to a person with knowledge of the deal.

Now the question is whether BuzzFeed can maintain the agility and skills of a tech startup while building the breadth of a large media company. “As we grow, how can we maintain a culture that can still be entrepreneurial?” said Jonah Peretti, the company’s co-founder and chief executive. “What if a Hollywood studio or a news organisation was run like a startup?”

That is exactly what Peretti is going to try. Today, BuzzFeed will announce that its new cash infusion will be used to make several major changes, including introducing new content sections, creating an in-house incubator for new technology and potential acquisitions, and putting far more resources toward BuzzFeed Motion Pictures, its Los Angeles-based video arm. The goal: Try a bunch of new features, and fast.

BuzzFeed, which is based in New York, started in 2006 as a kind of laboratory for viral content - the kinds of highly shareable lists, videos and memes that pepper social media sites. But in recent years, the company has added more traditional content, building a track record for delivering breaking news and deeply reported articles, and it has tried to marry its two halves in one site. But what has really set BuzzFeed apart, Peretti said, is its grasp of technology. The company, which now has 550 employees, has been especially successful at distributing its lists and content through mobile devices and through social sites like Facebook and Twitter. The photo-sharing site Pinterest, in particular, now drives more traffic to BuzzFeed’s Life section than Twitter does, Peretti said. Social media accounts for 75 per cent of BuzzFeed’s referral traffic, according to the company.

Chris Dixon, a general partner at Andreessen Horowitz, who will join BuzzFeed’s board, said: “We think of BuzzFeed as more of a technology company. They embrace internet culture. Everything is first optimised for mobile and social channels.”

Still, the company faces the same problem that more traditional publications do - rates for traditional online advertising, on general interest sites like BuzzFeed, have dropped consistently from year to year. To keep up, sites must either perpetually increase traffic at a steady clip, or innovate and move into new and potentially more lucrative areas like so-called native advertising and video. Already, most of BuzzFeed’s revenue is derived from BuzzFeed Creative, the company’s 75-person unit dedicated to creating for brands custom video and list-style advertising content that looks similar to its own editorial content. Peretti declined to share financial details, but he said BuzzFeed’s revenue for the first half of 2014 was twice as much as the first half of 2013. According to Dixon of Andreessen Horowitz, BuzzFeed is expected to generate revenue in the triple-digit millions of dollars by the end of 2014. Another media company, Vice, has prospered on a similar blend of such content offerings, and has also made a significant proportion of its money from its in-house advertising agency. It offers brands the publication’s ethos, and writing and video-making skills, as a way to reach consumers.

Still, some analysts consider BuzzFeed’s continued reliance on social media sites for traffic as a major liability. In 2011, The Washington Post introduced its Social Reader app, a major initiative that allowed users to read and share articles from the newspaper within Facebook’s News Feed. This initially reaped loads of web traffic for the publication. But when users complained that they were getting spammed by constant notifications of what their friends were reading, Facebook changed its News Feed settings, and traffic for the Social Reader plummeted. “If Facebook decides to tinker with its algorithms tomorrow, these viral publishers could be gone in the blink of an eye,” said Nate Elliott, an analyst with Forrester Research. “They’re putting their entire existence in another company’s hands.” This is not Peretti’s first media enterprise, however. He was a co-founder, along with Arianna Huffington and the venture capitalist Kenneth Lerer, of The Huffington Post. That online media startup, which relied heavily on showing up in Google search results for traffic, was sold to AOL in 2011 for $315 million. Lerer, also a BuzzFeed co-founder and investor, will soon take a more active role at BuzzFeed as executive chairman.

The push into more areas might help insulate BuzzFeed, too, from an overdependence on social media. BuzzFeed Motion Pictures, which is led by Ze Frank, a web video pioneer, aims to produce new videos - from six-second clips made for social media to more traditional 22-minute shows - at a rapid-fire pace. Initially, his team will focus on independent distribution, hosting video content on BuzzFeed.com, YouTube or other digital platforms. But BuzzFeed Motion Pictures could also look to produce feature-length films or shows, working in conjunction with traditional Hollywood studios. The company also plans a fast expansion into international markets, already a major driver of the site’s new-user growth, with plans to open offices in Japan, Germany, Mexico and India this year.

And the future of BuzzFeed may not even be on BuzzFeed.com. One of the company’s nascent ideas, BuzzFeed Distributed, will be a team of 20 people producing content that lives entirely on other popular platforms, like Tumblr, Instagram or Snapchat. Initially, it will not be a direct revenue stream for the company. But Peretti says it will ultimately give the company a much larger reach than traditional counts of web page views can measure. “We’re organising ourselves to be a media company for the way people consume media today,” Peretti said.