Bulmers is slowing it right down for new advertising campaign 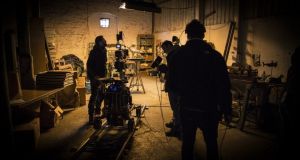 The production team work on the new Bulmers television ad ‘Not a Moment Too Soon’ which was filmed in Dublin, Wicklow and Clare

C&C’s Bulmers cider brand has returned to television advertising with a new time-themed campaign called “Not a Moment Too Soon”. The ad is “a return to our roots” and celebrates “taking it slow”, according to Bulmers marketing manager Belinda Kelly.

“Defined by a pace, we wear our slowness as a badge of honour,” says Kelly, who describes the ad as “a homage to the time it takes to get things just right” – things such as the “perfect” pint of cider.

The campaign, which debuted this week, was created by agency Publicis Dublin in partnership with Shane Whelan of PROjekt, who has worked with Bulmers on its advertising for almost 20 years. The ad, which was filmed in Dublin, Wicklow and Clare, is produced by Antidote Films and directed by Irish filmmaker Aoife McArdle, who is known for her work on music videos, including the recent U2 single Every Breaking Wave.

Bulmers is investing more than €1 million on the campaign, which will run across television, radio, digital, out-of-home and below-the-line marketing.

The cider, founded in Clonmel by William Magner in 1935, has often used the concept of time in its advertising, with slogans including “Nothing Added But Time” and “Time Dedicated to You”.

1 In this strangest of recessions, what happens next for Ireland?
2 Bank of Ireland sees about 2,000 staff apply for voluntary redundancy
3 Michael O’Leary is the boss you want to lead an airline out of crisis
4 Estée Lauder staff at Dublin airport plan further strike action
5 Should I switch bank now with Ulster Bank at risk of closing?
6 Best Covid-19 ‘influencers’ will avoid hectoring
7 Dunnes Stores set to enter grocery delivery market
8 Minister seeks AG’s advice on banker accountability laws
9 Overhaul of lease arbitration regime would be a game changer for retailers
10 EY Entrepreneur of the Year: nominee profiles
Real news has value SUBSCRIBE