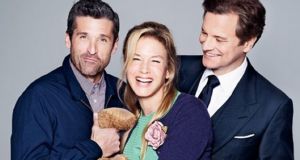 Bridget Jones’s Baby, the third instalment in the big-screen adventures of Helen Fielding’s big-swigging klutz, has done so well at the UK box office that it has broken fresh records for the production company responsible. A continued healthy run over the weekend, contributing to a $41.1 million running UK total, has meant Working Title is the first British company to make $1 billion (£770 million) at the UK box office.

“When we started, a British film doing a couple of million at the box office outside of Bond was amazing,” Tim Bevan, co-chairman of Working Title said.

“Four Weddings and a Funeral was a lightbulb moment for us where a non-American film could really do big commercial business, and it’s great that the audience has come along for that.”

Despite Bridget Jones’s Baby’s success in the UK, it has experienced more pronounced teething trouble with US audiences – the film has so far only taken $21 million in the US.

In its 33-year history, Working Title has made more than 100 titles, and built fruitful collaborations with directors such as Stephen Frears, Edgar Wright, Paul Greengrass, the Coen brothers and Richard Curtis, as well as with other studios and distributors.

It has a first-look production agreement with Universal Pictures – which led to recent success with the likes of Everest ($15.8 million in the UK) and The Danish Girl ($10.8 million) – as well as an informal relationship with StudioCanal, with whom it saw its biggest pre-Bridget hit (Legend, which took $28 million in the UK).

500,000 job losses and a €22bn exchequer hole, Digicel’s debt plan and An Post’s boost 06:30
State should give us all the gift of Paschalbonds 05:38
Unprecedented hit to Irish economy as unemployment claimants exceed 500,000 05:35
Covid-19: Westport braces for tough times ahead 05:26
An Post sees big jump in people opening new current accounts 05:13
Search executive
jobs on irishtimes.com