Club aims to be first with €1bn turnover 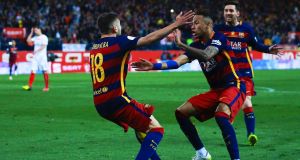 Despite being dumped out of the pan-European Champions League by Spanish rivals Atlético Madrid this year, FC Barcelona remains the footballing world’s number one, at least when it comes to sponsorship deals.

The club signed a new 10-year kit agreement with Nike last month, which it expects to bring in €150-€155million (£116-£120 million) annually, compared with the current €60million. When the arrangement takes effect in 2018, it will be football’s most lucrative shirt deal ever, far outstripping Manchester United’s £75m-a-year agreement with Adidas.

Barcelona also soon expects to become the world’s top club for on-shirt advertising as well. At present, Manchester United holds that honour through its £50 million-a-year contract with US carmaker Chevrolet. But the Catalan club is in “advanced talks” with several companies, including Qatar Airways, whose deal expires this year, according to Manel Arroyo, the club’s head of marketing.

Though Barcelona’s new Nike kits for the 2016/17 season have already been unveiled without sponsors, a new agreement is due to be signed some time this summer. The sale of naming rights for El Camp Nou, Barcelona’s stadium, is also in the works.

Mr Arroyo attributes Barcelona’s commercial success to a number of factors, not least its success on the pitch. Despite Champions League disappointment, it won both La Liga and the Copa Del Rey, Spain’s two domestic competitions.

“We are the best football team in the world, so naturally we would look to do the best deals”, says Mr Arroyo. The club has ambitions, unveiled late last year, to become the first with annual revenue of €1 billion.

There are also far-flung sponsors, pointing to a growing overseas audience for European football. The list includes Chinese smartphone maker Oppo, Saigon-Hanoi Bank, Brazilian foot deodorant Tenys Pé, and Japanese property website Apamanshop. The club now has an office in Hong Kong, another opening soon in New York, and plans for a third in São Paulo.

Revenue from “marketing” – principally sponsorship – rose by a third in the 2014/15 season to €225 million, the most recent for which figures are available. Other forms of income, such as media rights and match day revenue from tickets and concessions, also rose, but at a much slower pace. Marketing – at 37 per cent of the total – is now the largest revenue source for the club.

Barcelona also has some of the world’s most recognisable on-field stars too - vital marketing assets for the club’s partners - who now have “marketing days” blocked out in their calendars for shooting commercials and promoting products.

A recent ad campaign for home appliance maker Beko, which sponsors the sleeves of Barcelona shirts, features cartoon versions of forwards Lionel Messi and Neymar, and a TV spot in which Luis Suárez fetches strawberries from a Beko fridge.

Another key factor is Barcelona’s dominant presence on social media. It has 2.3m subscribers on YouTube, 18 million followers on Twitter, more than 30m on Instagram and 93m likes on Facebook – all considerably more than Manchester United, though admittedly not as many as Real Madrid player Cristiano Ronaldo whose Facebook fans number 112m.