‘Bake Off’ producer Sideline picks up cheque for family format 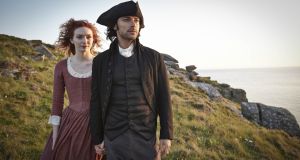 Sideline Productions, which is currently busy making the fourth series of the Great Irish Bake Off for TV3, collected a €10,000 cheque (in giant publicity-sized form) at the Celtic Media Festival in Dungarvan last week to develop factual format, Bucking the Trend.

The intention is that the show, once developed, will run in two versions, one for RTÉ and the other for Norwegian public-service broadcaster NRK, the co-sponsor of this Format Farm scheme.

In Bucking the Trend, a “whistleblower” will call in the television producers and their associated train of experts to help change a habit passed from generation to generation in their family. Sideline’s co-founder Billy McGrath, in his pitch, cited his father, who refused to follow his own father into the rail business, as had been expected of him.

The series aims to “break the cycle” on anything from smoking to obesity to education. “It’s about changing lives, and solving long-term problems,” said McGrath, with the prize “being positive and winning love back.”

Casting the first series will be hard, he admitted, as potential subjects won’t quite know what they’re letting themselves in for.

The Celtic Media Festival, destined for the Isle of Man in 2017, brought a flurry of awards to RTÉ and TG4 as they competed against offerings from Scotland, Wales and other Celtic parts of the world, including Cornwall.

Filmed and set on Cornish beaches, cliff-tops and meadows and starring Irish actor Aidan Turner in the title role, Poldark, made for the BBC by ITV-owned Mammoth Screen, had more than enough Celtic credentials to take the “Torc” for best drama.

Filming has now wrapped on the second series of Debbie Horsfield’s revival of the 1970s drama, based on books by Winston Graham. The first run attracted handsome ratings and international sales in 2015.