Augmented reality is more than just a gimmick 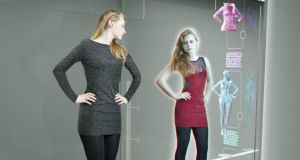 This dress on an online shopping site looks chic, and I want to buy it right away, but is it really me? Step into the River Island or the New Look or the, er, Ann Summers virtual fitting room

‘Maybe I want a pool in the backyard,” says the man demonstrating an augmented reality app. Everyone in the room, notwithstanding the fact that most of them live in nippy Ireland, starts to fantasise about having a pool in their backyard. But the man in control of the graphics has already moved on.

“How about a rooftop garden? Oh that’s not good enough, let’s add a couple of trees in the front yard.”

By the time Brian Mullins, chief executive of an LA-based software company called Daqri, installs a helicopter pad in the animation of his dream home, the audience at Dublin’s first-ever augmented reality marketing conference has succumbed to consumerist wish fulfilment.

“Mall face” is an expression of US origin used to describe the dazed, dilated-pupils effect of walking into a shopping mall and becoming overwhelmed by the array of brand choices. The advent of augmented reality will result in new coinages – the Google Glaze, perhaps – as opportunities to consume proliferate.

But augmented reality isn’t fantasy. It is a view of a real, physical world – your street, your home, your bedroom, your body, even your newspaper – overlaid with virtual elements. Reality is “augmented” by computer-generated sensory input such as sound, video, graphics and data.

For marketers, it is a kaleidoscope of potential, because it brings inanimate objects – including non-digital media – to life. It shows you how the real world can be made better by extra stuff. It’s a semi-virtual brochure.

What would this sofa look like in my livingroom? The Ikea augmented reality app will help you with that. This dress on an online shopping site looks chic, and I want to buy it right away, but is it really me? Step into the River Island or the New Look or the, er, Ann Summers virtual fitting room.

Augmented reality, delivered via mobile or wearable tech such as Google Glass, chips away at the “imagination required” hurdle that consumers come up against when they shop. To phrase this in purer marketing-speak, augmented reality can “reduce the friction between intention and action”. Look now. Choose now. Buy now. And maybe even employ no more than a muscle twitch while doing so.

Organised by Dublin Institute of Technology marketing lecturer and the Persuaders podcast host Alex Gibson, the conference in the Guinness Storehouse bid to persuade delegates that augmented reality was “no longer just about 3D pop-ups” and was in fact “the eighth mass medium”. The meeting of tech and marketing minds on the 3D plains of augmented reality could have a supporting role in the next consumer boom.

Still, the word “gimmicky” bubbled to the surface on occasion as marketers weighed up campaigns that had incorporated augmented reality technology.

Maybelline could work out that when they used their Fuchsia Fever shade in Blippar-enabled advertisements, they converted the most users to actual sales of polish. “None of us know why,” said Butcher. “But purple sold the best.”

The term “augmented reality” should be consigned to jargon hell, however. She hated it. “It just sounds nerdy and techy to me, and more than that, I actually think it is damaging consumer perceptions of what this technology can do.”

Object image recognition is at the heart of what Blippar does, which means the London-based company’s work in the wearable tech arena is getting a lot of big brands very excited. The more “blipps” there are – and there have been 4.5 million uses of the app to date – the more the “gimmicks” start to seem like commonplace behaviours.

Blippar’s ambition is to be “the verb” behind this new form of consumer engagement. Blipp to buy, blipp to win, blipp to unlock exclusive content, blipp to skip all advertisements between now and the end of time. (That last one is not one of theirs.) But Butcher had other suggestions for the language marketers might use. “I like magic lens, I like unlocking, I like instantaneous experiences,” she said.

Any dystopia-prone science fiction writer would surely agree that “augmented reality” is not a marketing-friendly term. If reality is bad to start with, then augmented reality will be even worse. “Magic lens”, on the other hand, sounds transformative and entirely delightful – almost as if everyone has a backyard big enough for a swimming pool in the first place. What on earth could go wrong?