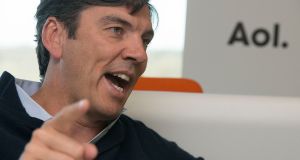 Chief executive Tim Armstrong at AOL’s offices in Dublin: he wants the company to reach 2 billion users, up from about 700 million. Photograph: Dave Meehan

Following its $4.4 billion (€3.9 billion) acquisition by telecoms giant Verizon last year, AOL is bidding to become “one of the largest mobile media companies in the world” by 2020, a target that means chasing advertising business which Google and Facebook have made their own.

“The mobile economy is in its first stage. Even the internet economy, though it has been around for 20 years, is still in its early stages. So it is an unbelievable opportunity for us,” says Armstrong, who was visiting AOL’s Irish offices in Dublin on Thursday.

Armstrong, who left Google for AOL in 2009, is credited on Wall Street for reviving what was then a struggling company, best known for its legacy dial-up internet business and its part in the ill-fated Time Warner-AOL mega-merger.

It has most recently acquired mobile ad tech company Millennial Media and agreed a deal with Microsoft to sell its ad inventory in nine markets.

He wants AOL to reach two billion users, up from about 700 million, and work with as many as 10 million “creators” - publishing partners or “individual creators of content”. The core target is to collect more than $10 billion and as much as $20 billion in annual ad revenue by 2020.

Mergers and acquisitions (M&A) are one way to get there – Verizon is tipped to be interested in any carve-up of Yahoo. Another path involves developing “a whole series” of ad tech platforms, and AOL’s engineer-heavy Dublin operation is part of this.

“In Dublin, our headcount has grown by more than 20 per cent over the past year,” he says. AOL now employs about 210 people here across six floors of the Brunel Building in Heuston South Quarter, overlooking the Phoenix Park.

One of the “key teams” in Dublin, where its operations are overseen by senior vice-president Aengus McClean, concerns a drive to make digital advertising more targeted, which allows AOL to increase its ad prices.

“I think advertising is going to get much more expensive in the future,” Armstrong says.

The industry was “not paying attention” to the consumer experience, he says, and the rise of adblockers was “a pretty natural reaction”.

His plans also include more activity in mobile video content and the extension of the Huffington Post and TechCrunch to more markets.

AOL is also “very respectful of the larger companies that are very strong in our space”, he says. But he is confident that the anticipated explosion in the mobile market, combined with industry consolidation, will propel its business.

“I expect mobile will end up dwarfing the internet in terms of the impact it has on the media business,” he says. “Mobile looks to me to be something that is an unstoppable trend.”