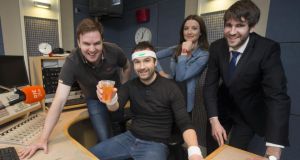 RTÉ Radio sponsorship manager Tara Farrell said the deal was “the first of many we hope to announce as 2fm evolves”.

The station, under its new head Dan Healy, is in the process of re-jigging its line-up of shows in order to court a younger and more urban listenership .

Breakfast Republic will be presented by Jennifer Maguire, Keith Walsh and Bernard O’Shea, with the title of the new show alluding to Maguire and O’Shea’s roles on RTÉ Two’s comedy show Republic of Telly .


‘Fast-paced lives’
Enda Ryan, brand manager for Berocca, said it was targeting 25-44-year-olds who lead “fast-paced lives” and hoped to educate them to use the product as part of their morning routine.

“The Berocca brand message will reach consumers at the optimal time of the day,” he said.

Berocca, which is owned by the multinational Bayer, is spending more than €500,000 on marketing “parent brand” Berocca Performance in Ireland this year, with the 2fm sponsorship following the launch of a television, online, outdoor and in-store campaign.

The product – which contains vitamins B and C, zinc and magnesium – uses the slogan “your daily high performance vitamin” and claims to help consumers “think smarter and act faster” . . . much like RTÉ bosses need to do if they want to return 2fm to profit.