Warning: the value of sterling can rise as well as fall 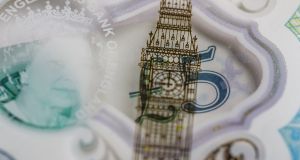 There was a relatively upbeat comment from the Bank of England on Thursday which indicated that another interest-rate cut was not on the cards. This boost for sterling helped it to gain ground against the euro and the dollar

Sterling is making further gains on the currency markets on Friday, with the UK currency now around 88.6p against the euro. This may provide some short-term hope for Irish exporters hammered by the sharp fall in sterling since the Brexit vote. Remember that not much more than one year ago sterling was as weak as 70p against the euro - and in recent weeks the rate has gone over 90p.

The key to understanding sterling’s swings now is to watch the politics more than the economic figures.

The British high court ruling on Thursday that the UK parliament must vote on the triggering of article 50 by the British government raised hopes that Brexit would not be as “hard” as had been feared.

Sterling had lost ground as the political tensions between Theresa May’s government and other EU countries rose following her hardline speech at the Conservative party conference. This was seen to signal a hard Brexit – involving the UK leaving the single market and customs union, economic disruption, tariff barriers and slower growth.

The obvious conclusion was to sell sterling.

The immediate reaction to the court ruling was that the influence of parliament would provide some constraint on the May government policies. Of course, the supreme court could overturn the decision next month. We will just have to see.

You can argue how the politics of this will all now play out. Will May have to soften her position to get Brexit through the House of Commons and House of Lords? Will the hard Brexit view prevail? Might there even be an early general election? Market analysts are divided on all this so expect a bumpy ride for sterling. And, of course, the economic figures will also play a lesser part.

This will be a long game, of course, and the bulk of analysts’ comment is still nervous about the outlook for sterling. May is expected to tell European Commission president Jean-Claude Juncker today that Brexit means, well, Brexit.

A further complication for us is the value of the euro, itself weak enough in recent times on speculation that the ECB will extend its monetary stimulus.

Most analysts remain nervous about the outlook for sterling, and a rocky ride looks guaranteed as the politics of Brexit ebbs and flows.

1 Eason acquires rival Dubray Books for undisclosed sum
2 Solar panels: Are they worth the investment?
3 Bank leaked my loan request to family who tried to rip me off
4 Fuel company loses €1.3m challenge over tax bill
5 When the Chemistry no longer works – the closing of a leading Irish ad agency
6 Ryanair and Aer Lingus monitor impact of coronavirus on travel to Italy
7 Stock markets tumble into the red for second straight day
8 Longview seeks permission for 753 homes in Cork’s outskirts
9 Up to 5,000 engineering jobs expected to be created in 2020
10 Over $12m from sale of Walford handed over in Sean Dunne bankruptcy case
Real news has value SUBSCRIBE