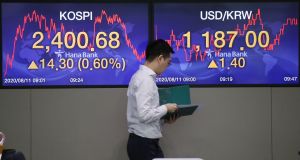 The pan-European Stoxx 600 was up 0.2 per cent, gaining for a fourth straight session. Sunrise Communications surged 26.8 per cent after Liberty Global launched a takeover offer for the Swiss telecoms group in a deal valued at 6.8 billion Swiss francs ($7.40 billion).

Wall Street indexes fell overnight on growing uncertainty about a stalemate in Washington over a fiscal stimulus deal, while data showed Britain’s economy shrank by a record 20.4 per cent between April and June, the largest contraction reported by any major economy so far.

London-listed shares of European food-ordering firm Just Eat also rose 3.3 per cent after reporting higher revenue and underlying profit for the first half of 2020.

1 Sean Quinn stunned at rebranding of Quinn Industrial Holdings
2 Probate is changing: What does that mean for you?
3 Irish golf tourism faces ‘wipeout’ unless Covid travel restrictions eased
4 Three Ireland switches on 5G network around the country
5 Will tracker mortgage be at risk if Ulster Bank closes?
6 Should I switch bank now with Ulster Bank at risk of closing?
7 Am I paying too much for my buy-to-let mortgage?
8 Mortgage breaks will not be extended beyond this week
9 Pilita Clark: The looming legal minefield of working from home
10 Galway-based CitySwift to create 50 jobs over next two years
Real news has value SUBSCRIBE