Markets await vote of no confidence in Theresa May 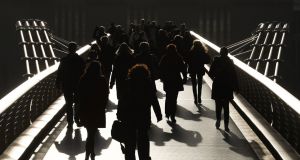 Heading to work in the City of London: all eyes are on the UK capital today. Photograph: Getty

Stocks rallied globally as the outlook for US-China trade took a positive turn. Sterling strengthened as Theresa May vowed to fight a challenge to her leadership.

US equity futures and European shares climbed following big gains in Asia after the chief financial officer of Huawei Technologies was granted bail and US president Donald Trump said he would consider intervening in the case if it helps get a trade deal with China.

In the UK, markets took news that Mrs May will face a vote of confidence from her own party in their stride. Sterling gained as several ministers rushed to back her and she vowed to contest the vote “with everything I’ve got”. Against the euro, it is trading at 90.19p, having strengthened from an earlier 90.69p.

The Iseq was more or less flat.

As well as the roller coaster news flow on the trade war and Brexit, investors are also keeping watch on the risk of a shutdown of parts of the federal US government. President Trump is at odds with Democratic leaders in Congress over funding for a border wall with Mexico.

Elsewhere, oil jumped on the easing trade war rhetoric and after a US industry report signalled a bigger-than-expected draw in nationwide crude inventories. Treasuries edged lower after president Trump warned the Federal Reserve against hiking interest rates this month. India’s bonds rallied after an ally of prime minister Narendra Modi was named as the new central bank chief.

And in France, the spread between government bond yields and those in Germany was about the highest since the 2017 election. Efforts to quell popular unrest will have an impact on the country’s deficit, causing a new headache for the EU as it takes a tough line with Italy over its budget. Italian bonds climbed as an official said the nation will submit new fiscal targets to the European Commission. – Bloomberg