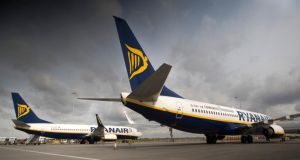 Ryanair, one of the weightiest stocks on the Iseq, contributed to yesterday’s decline by falling 2.37 per cent to close at €6.82. Photograph: Simon Dawson/Bloomberg

The Iseq’s bad run continued yesterday. The index fell by 1 per cent on international economic concerns, its worst three-day run since July 2012.

European stocks in general also declined for a third day, after swinging between gains and losses, as investors weighed the potential for interest rates to remain low for longer amid concerns the global economy is slowing down.

US stocks extended losses, with the Standard and Poor’s 500 Index reversing most of its biggest rally this year, as small caps tumbled on speculation that the advance was overdone and similar concerns about global economic strength.

DUBLIN Ryanair, one of the weightiest stocks on the Iseq contributed to the decline by falling 2.37 per cent to close at €6.82. After opening marginally up, it fell steadily from noon onwards despite a report by Goodbody this week that focused on its opportunities in eastern Europe. JHP Morgan downgraded Ryanair to neutral this week.

Fyffes fell 1.54 per cent to €1.02, after news emerged that its proposed merger with US rival Chiquita Brands is facing a new threat. Shareholders of Chiquita have launched a class action against the US company to try and injunct it from merging with Fyffes, and favour an all-cash buyout by Brazilian billionaires Joseph Safra and Jose Luis Cutrale.

Kenmare Resources was one of the few risers on the market in Dublin yesterday, up 2.15 per cent to close at 95 cents. Some of it was as a positive read through from third quarter results yesterday morning from minerals firm Sierra Rutile, which operates in Sierra Leone. Kenmare is active in minerals production in Mozambique.

Hibernian REIT fell 1.1 per cent yesterday. Shortly before the market closed it issued a statement to say it had raised €299 million in a share placing.

LONDON Randgold climbed 6.1 per cent to 4,298 pence and Fresnillo jumped 6.4 per cent to 770 pence as Numis named them top picks, citing their growth profiles, asset quality and strong management.

Hays added 3.8 per cent to 122.7 pence. The British professional-recruitment agency reported a 4 per cent increase in net fees for the first quarter, led by Britain and Ireland.

Royal Mail was 1 per cent higher after its announcement that it has reached a settlement with the French competition authority following an investigation into breaches of antitrust laws. The company has made a provision of £18 million for a potential fine and costs, less than previous estimates by City analysts. EUROPE Südzucker tumbled 12 per cent to €10.39 as it reported a 73 per cent decline in second-quarter operating profit. The company said that reaching its target for annual profit of €200 million has become more difficult because of weaker sugar and ethanol markets in Europe.

Solvay climbed 1.3 per cent to €114.70. The Belgian chemical maker forecast high single-digit percentage profit growth. Solvay also restated its results for 2013 and the first six months of 2014 to take into account the sale of its sulphuric-acid unit Eco Services. NEW YORK Gap plunged 11 per cent after saying its chief executive officer will step down. Advanced Micro Devices also sank 6.3 percent after naming a new chief executive a week before reporting earnings.

Energy stocks declined 2.2 per cent, led by losses of more than 4 per cent in both Newfield Exploration and QEP Resources. The group has plunged 14 per cent since reaching a high in June as the price of oil has tumbled. Consumer staples and utility shares were the only groups to advance, climbing at most 0.4 per cent, with Pepsi’s 1.5 per cent jump pacing gains. – (Additional reporting: Bloomberg, Reuters, PA)