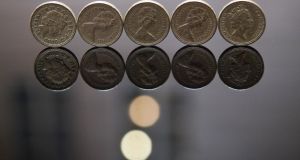 Five £1 coins reflected on a computer tablet screen in London. The fall of sterling following the Brexit vote – and its continuing fluctuations – look set to continue, according to analysts. Photograph: Justin Tallis/AFP Photo

Sterling was the world’s worst-performing currency this month, trailing behind about 150 peers, as the first signs of how Brexit will look emerged. Sterling headed for its biggest monthly decline versus the dollar since the UK voted in June to leave the European Union (EU), amid speculation that the government is headed for a so-called hard Brexit, where unfettered access to Europe’s single market is sacrificed for immigration controls.

The pound dropped after political headlines and comments from lawmakers and central-bank officials underlined its vulnerability as concern about Britain’s exit from the world’s largest trading bloc intensified.

“This month has all been about hard Brexit concerns coming to the forefront,” said Viraj Patel, a foreign-exchange strategist at ING in London. “It’s typical for a currency trading under heightened political uncertainty to be vulnerable to new news, either good or bad, and this will be an ongoing factor until we get clarity” about the nation’s future relationship with the EU, he said.

It has fallen every month since April, cementing its position as the worst-performing major currency this year, having weakened more than 17 per cent.

The Bank of England is due to make its interest-rate decision and publish its quarterly inflation report on Thursday. – (Bloomberg)