Sterling drops to a three-year low against the euro

Downward pressure weighs on pound ahead of key data being released 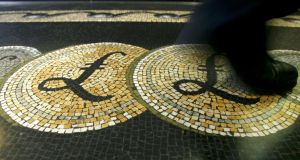 Sterling symbols on the Bank of England floor: the currency fell below $1.29 on Monday, the lowest level since July 11th and down 0.2 per cent on the day.

Sterling has hit a three-year low against the euro, with the UK currency trading above 87p against the euro on Monday. A string of key UK economic data – including July inflation figures due on Tuesday – are expected to determine the short-term direction of the currency.

The sterling weakness will put further pressure on Irish exporters to the UK. Ibec warned earlier this month that if the euro approached 90p sterling, some 7,500 jobs and €700 million in exports from the agri-food sector would be at risk. The organisation has called for Government intervention to support affected companies.

Sterling lost some 0.7 per cent against the euro on Monday, trading at about 87p against the euro in New York on Monday night. Market data showed that significant speculative positions had been taken against the UK currency, though many analysts also expect the euro to remain weak in the months ahead.

Sterling dropped before reports this week on July UK inflation, retail sales and jobless claims, which are forecast to show the British economy is struggling in the wake of the June 23rd referendum. Brexit has pushed the pound down 12 per cent on a trade-weighted basis since the European Union referendum, which will fuel import costs and feed through to consumer prices. The Bank of England expects to price-gains to accelerate in the coming months, and economists see it bursting through the 2 per cent goal in the second quarter of 2017, sooner than projected before the referendum.

The pound dropped to a 31-year low against the US dollar after the Brexit vote, and resumed its decline following the Bank of England’s decision this month to cut interest rates and boost monetary stimulus.

The currency fell below $1.29 on Monday, the lowest since July 11th and down 0.2 per cent on the day. It has dropped more than 13 per cent against the US currency since the Brexit vote.

“[There is] no point over-thinking. Sterling is prone to short-covering but is also trending lower over time,” Société Générale strategist Kit Juckes said.

Further sterling weakness would put pressure on forecasters to reduce their Irish growth forecasts for 2017. Ibec calculates that every 1 per cent drop in the value of sterling against the euro translates to a 0.7 per cent decline in exports to the UK. Slower UK economic growth will also affect Irish exporters by slowing demand

While surveys have already signalled contractions in manufacturing, construction and services since the EU referendum, this week’s data will provide more concrete evidence of the state of the economy.

The Bank of England cut interest rates to a record low and restarted its quantitative-easing programme on August 4th in an attempt to shield Britain from the effects of its decision to quit the world’s biggest single market.The reports will provide “the first real numbers” on the nation’s economy since the vote, said Richard Falkenhall, a strategist at SEB in Stockholm.

Market forecasters expect Tuesday’s July inflation data to show a 0.5 per cent annual rise. The inflation figures will have an influence on Bank of England policy. The central bank acted to boost the economy following the Brexit vote, but if inflation rises too quickly, then it may be limited in what further measures it takes.

For the moment, investors expect central bank stimulus to continue in the UK, US and the euro zone, which helped to drive equity markets to new highs yesterday.

Better-than-estimated corporate earnings have also helped lift stocks in the past month, boosting valuations.While the S&P500’s price relative to future earnings has climbed to the highest since 2002, volatility with American shares remained near all-time lows. “Stocks have retained a hot pitch and there’s a lot of demand for equities,” said Andrew Brenner, the head of international fixed income for National Alliance Capital Markets.

1 Irish company paid €1.2m a year by collapsed Blumenthal-linked Australian restaurant
2 Greencoat Renewables buys Clare wind farm for €35.4m
3 Hugo MacNeill steps back from Goldman Sachs role
4 Why bosses should not be afraid of speaking out on Instagram
5 Should AIB compensate me for upsetting letter on arrears?
6 Irish economy to grow by 3.4% this year, predicts EY
7 ‘I wouldn’t be a big saver. I tend to buy now and repent at leisure!’
8 Chris Johns: The Johnson administration will spend, and needs a quiet Treasury
9 ‘Germans are very efficient and reliable. Cancelling is alien to them’
10 Tax shifts won’t drive multinationals out of Ireland - Moody’s
Real news has value SUBSCRIBE