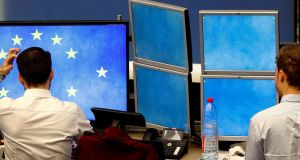 Concern over China’s economic outlook and global trade left major world stock indexes little changed on Thursday, while an end to the latest chapter in Britain’s exit from the EU helped to stabilise sterling.

Disappointing earnings in the US from Morgan Stanley, hot on the heels of similarly weak numbers from JP Morgan Chase earlier in the week, hurt sentiment on Wall Street.

The pan-European STOXX 600 index rose 0.08 per cent, and MSCI’s gauge of stocks across the globe gained 0.03 per cent.

The Iseq remained relatively unchanged in a quiet day’s trading. Cairn Homes enjoyed a 4 per cent bounce on the back of positive trading numbers. The company said total revenue for the year was €337 million, compared with €149.5 million in 2017. Shares in the housebuilder are now 20 per cent above their all-time low recorded in December.

The positive vibe around Cairn triggered buying in other property firms, with reits – Green, Hibernia and Ires – all trading up.

Ryanair traded marginally down at €10.70, outperforming rivals such as EasyJet.

ITV dropped to the bottom of the FTSE, down 5.9 per cent after Bank of America Merrill Lynch downgraded it to “underperform” from “buy” in a negative note on European broadcaster stocks. Shares in the British broadcaster had their worst fall since February 2018.

EasyJet shares were down 2 per cent, suffering from a downgrade from Barclays.

A faller after results was Whitbread, its shares down 0.7 per cent after the Premier Inn owner reported weaker sales growth in its UK home market.

Overall, analysts have been very downbeat on British companies’ earnings, consistently downgrading their expectations since September.

Housebuilders Berkeley, Barratt Development , and Taylor Wimpey fell 0.5 to 1.2 per cent after a survey of property valuers showed the weakest three-month outlook for UK house sales on record in December.

Topping the risers, shares in Primark owner ABF climbed 6.9 per cent after it stuck to its full-year earnings guidance, reporting revenue growth in the Christmas quarter in all its businesses except sugar.

Société Générale shares were the biggest losers within the banking sector and on the French blue chip index Cac 40 were down 5.6 per cent. The French bank said its fourth-quarter results would be affected by tough market conditions and the impact of some asset sales. The warning hit European banking stocks, which fell 1.2 per cent.

Austrian steelmaker Voestalpine was another heavy faller, sliding 4.7 per cent after another profit warning.

US stocks eked out gains to consolidate near a one-month high, helped by advances in healthcare and industrial shares and as the financial sector shrugged off Morgan Stanley’s disappointing earnings. Shares of the investment bank tumbled 4.52 per cent after reporting a lower-than-expected quarterly profit, rounding off earnings for the big six Wall Street banks on a weak note.

The trade-sensitive sector was 0.48 per cent weaker earlier in the day on fears that the fragile Sino-US trade talks could be torpedoed after US politicians introduced bills to ban the sale of US chips or other parts to Huawei Technologies and certain other Chinese telecoms firms.

Helping the market was a 0.60 per cent bounce in health stocks.

Netflix, which will kick off earnings for the Faang group when it reports after the bell, rose 0.33 per cent. The video-streaming pioneer raised US subscription rates earlier this week. – Additional report by Reuters