Reactions in other major currencies such as the dollar, euro and yen were limited 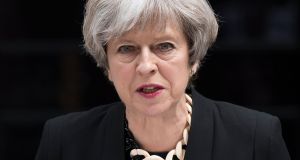 The latest results just after 6am showed May’s Conservatives have won 309 of the 650 seats, short of a majority, while Corbyn’s left-wing Labour have 258 - producing a “hung parliament” and deadlock.

Such a shock result was expected to plunge domestic politics into turmoil and alter the nature of Brexit talks.

But reactions in other major currencies such as the dollar, euro and yen were limited, also having taken in stride testimony by former FBI director James Comey, which was initially expected to be the other big event of the week.

“Britain’s exit from the European Union will continue regardless of the political turmoil likely to be created by the election results. Other currencies, like dollar/yen, are not reacting much as it is a more domestic affair this time, unlike last year’s Brexit vote,” said Koji Fukaya, president at FPG Securities in Tokyo.

“The focus for the broader currency market will now shift towards the Federal Reserve’s policy meeting next week.”

The Fed ends a two-day meeting on Wednesday. The central bank is widely expected to hike interest rates and the focus is on whether it would leave the door open for further monetary tightening in the months to come.

The dollar index against a basket of major currencies was up 0.3 per cent at 97.222.

The index had retreated to a seven-month trough of 96.511 midweek when caution ahead of Comey’s testimony and the British election drove US yields to lowest levels since November. But yields have since bounced from the lows as risk aversion ebbed.

Comey accused President Donald Trump of firing him to try to undermine its investigation into possible collusion by his campaign team with Russia’s alleged efforts to influence the 2016 presidential election.

While this was the most eagerly anticipated US congressional hearing in years and was approached by investors with caution, it did not offer fresh insight for the financial markets. The Nasdaq managed to close at a record high on Thursday.

“There were many participants who wanted to take advantage of the volatility resulting from a key event like the British elections, which explains the pound’s initial steep drop,” said Yukio Ishizuki, senior currency strategist at Daiwa Securities.

“The swings in the pound have not spilled over into other currencies as the market was well hedged and prepared for a variety of election scenarios.”

The euro extended overnight losses and was 0.1 per cent lower at $1.1200. It had risen to a seven-month high of $1.1285 a week ago as the dollar retreated broadly on weaker-than-expected US employment numbers.

But the common currency was capped after the European Central Bank on Thursday cut its forecasts for inflation and said policymakers had not discussed scaling back its massive bond-buying programme.

It edged away from a six-week peak of $0.7568 scaled on Wednesday after data showed Australia’s economy continued to expand in the first quarter.