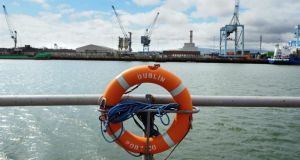 The company behind plans to build an aviation fuel pipeline connecting Dublin’s port and airport will pay at least €1.1 million to one of its backers if the project gets the go ahead.

Independent Pipeline Company will seek permission from Dublin City and Fingal councils for the €20 million project in the coming weeks. It is designed to replace the road tankers that now transport the fuel with a direct supply line.

Accounts lodged by the company show that it owed one of its shareholders, engineering firm, Fingleton White, and a director, Gerry McManus, €1.13 million to cover costs incurred up to the end of February 2013.

The documents say the amount is “payable in the event that the project goes ahead or if approved at a meeting of shareholders”. The company confirmed yesterday that those costs have since increased but did not reveal by how much.

Mary White of Fingleton White said the company has been working on the project since 1999. The costs involved include consultancy fees, payments for safety reports, environmental impact statements and the construction of a short section of pipeline at Dublin Port.

The Co Laois-based engineering firm’s partner in the project is Reynolds Logistics, a Dublin transport business that specialises in supplying aviation fuels.

Independent Pipeline has not revealed the likely cost of the development, but an industry rule-of-thumb, which calculates €1 million for every 1 km of pipe, indicates that it will need an investment of €20 million.

Fingleton White originally got planning permission for a pipeline in 2001, but that was shelved after the attack on New York’s World Trade Center that September sent the aviation industry into recession.