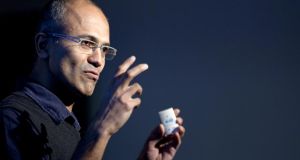 Microsoft’s shares scaled levels last seen in the dotcom boom on Tuesday following reports that the company plans to unveil an iPad version of its Office software suite, potentially generating billions of dollars in revenue.

Microsoft chief executive Satya Nadella may unveil the iPad app at an event on March 27 as part of his “mobile first cloud first” strategy.

The event would be Mr Nadella’s first major public appearance since his appointment last month.

Microsoft shares rose as much as 5 per cent to $39.90, adding $15 billion to the company’s market value. At that price, the stock was up about 10 per cent since the announcement of Nadella’s appointment on February 4. The shares last touched $40 in July 2000.

Microsoft has had iPad and iPhone versions of Office primed for several months now, sources said, but the company has dallied on their release due to internal divisions, among other things.

Analysts said the lack of an Office version for the iPad may have robbed Microsoft of billions of dollars in revenue.

“We estimate that if 10 per cent of the iPad install base were to subscribe to Office then this could add 15 million subscribers and generate $1.1 billion to $1.5 billion in consumer Office subscription revenue per year,” Bernstein Research analyst Mark Moerdler said in a note on Tuesday.

Investors have for years urged Microsoft to adapt Office, its most profitable product, for iPhones and iPads and devices using Google’s Android software rather than shackling it to Windows as PC sales decline.

1 ‘No demand... because there are no people’ at well-known Dublin pub
2 Revised help-to-buy scheme opens for applications
3 Divorce: What will it cost and can you afford it?
4 Apple received $250bn dividend from Irish subsidiary in 2019
5 Transferring the family farm without a tax headache
6 Nearly 30,000 could lose pandemic payment if they do not confirm eligibility
7 Post-Covid television starts to shape up – but with missing pieces
8 HSE says fix for Covid Tracker app rolled out to all Android users
9 Cairn Homes revenues down but average price of starter homes nudged up
10 UK criticised for ‘unforced errors’ on post-Brexit trade deals
Real news has value SUBSCRIBE