Markets stable ahead of US Federal Reserve policy meeting 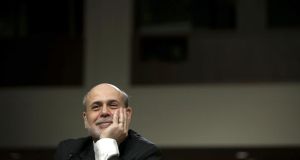 Ben Bernanke, chairman of the Federal Reserve, which goes into its second day of its policy meeting. Photograph: Alex Wong/Getty Images

Markets held their breath yesterday, amid concern that the US Federal Reserve would signal stimulus cuts at its two-day policy meeting.

DUBLIN
According to brokers it was a “busy enough day” in Dublin, with some volatility in the market, which started off quite weak but finished the day slightly higher, up 0.3 per cent. Despite the start of the summer season, volumes are continuing to hold up on the Iseq.

There were sellers in Bank of Ireland, which fell below 15 cent for the first time in a while, but managed to recover later. It closed up by 3.3 per cent at €0.157.

There was a bit of pressure on drinks group C&C, which was volatile during the day but closed up by 1.4 per cent, or 6 cents, at €4.26. There was “okay volume” in airline Ryanair, which got a bit of support from investors to advance by 0.6 per cent, or 4 cents, finishing at €6.85.

LONDON
Britain’s blue-chip share index rose, as traders bought up beaten-down financial heavyweights in a cautious session ahead of a policy meeting of the Federal Reserve meeting.

The FTSE 100 closed up 0.7 per cent, with financials, which include banks, asset managers and insurers, contributing 24 points to the advance.

HSBC and Standard Chartered rose 2.2 per cent and 1.8 per cent respectively, benefiting from positive comment by Citigroup. HSBC alone accounted for 10.7 points of gains, as the FTSE 100’s second-biggest company was raised to “buy” from “neutral” by Citigroup, while the note reiterated a “buy” rating on Standard Chartered.

Lloyds and Royal Bank of Scotland also saw strong gains, receiving positive comment from Aviva ahead of a speech by the British finance minister today expected to outline their return to full private ownership.

Whitbread was the top individual gainer, up 3.6 per cent after the owner of the Costa Coffee chain and Premier Inn hotels posted a first-quarter acceleration in sales growth.

EUROPE
European stocks were little changed ahead of the Federal Reserve’s meeting. The Stoxx Europe 600 Index lost 0.1 per cent, Germany’s DAX added 0.2 per cent and France’s CAC 40 lost 0.1 per cent.

Kabel Deutschland advanced 3.8 per cent to €85.60, its highest price since March 2010. Germany’s largest cable TV operator said it received a proposal from Liberty, the cable company controlled by John Malone.

The offer comes after Vodafone Group last week said it approached the German company about a takeover. Liberty offered Kabel Deutschland about €85 a share, the Financial Times reported.

Danske Bank fell 6.1 per cent to 104.90 kroner, its biggest retreat since October, after the Financial Supervisory Authority asked it to adjust its internal-rating model in a step that will require the lender to add about 100 billion kroner (€13.45 billion) to its risk- weighted assets “over time.” Denmark’s biggest lender had underestimated its risky assets, the regulator said yesterday.

US
The S&P 500 Index advanced for a second day, as housing starts climbed in May and investors awaited the outcome of the Fed policy meeting.

In early trading, AT&T and American Express rallied at least 1.4 per cent, pacing gains among the largest companies.

BlackBerry gained 1.5 per cent to $14.51 after RBC Capital Markets raised its estimates for sales of BlackBerry 10 devices to 3.5 million units in the first quarter, from 2.75 million. – Additional reporting Bloomberg/ Reuters