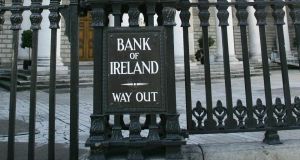 The euro dropped to two-week lows after a Greek official said the country may miss a debt repayment, but stock markets in the US and Europe held near recent highs as traders awaited signals on Federal Reserve interest rate shifts.

Ahead of talks today with Minister for Finance Michael Noonan on its mortgage pricing, Bank of Ireland finished unchanged at 36.4 cent at the end of a day in which more than 24 million shares were traded.

Permanent TSB, which also meets the Minister today, saw its stock drop 1.33 per cent to €4.46 but volumes were thinner. Some 1.3 shares changed hands.

INM, which delivered a trading update on Tuesday, saw its stock rise 1 cent or 5.41 per cent to 19.5 cent with a little more than 20 million shares traded on the day.

The FTSE 100 Index closed 12.2 points higher at 7007.3 in a session that saw traders react to the release of a batch corporate results, including the first profits rise at Marks & Spencer in four years. Meanwhile Barclays shares rose 3 per cent, or 8.8p, to 271.6p. Part-nationalised Royal Bank of Scotland, which agreed to pay a further $669 million to US authorities, on top of other penalties, was also up. Shares climbed 6.2p to 354.7p.

His comments pushed the euro back below $1.12 for the first time in a week. The FTSEurofirst 300 ended up 1.7 percent. Gains of more than 2 percent on Germany’s DAX and the CAC 40 in Paris outpaced a 0.38 percent rise on London’s FTSE. European bond yields tumbled, with benchmark 10-year German Bunds down 4 basis points at 0.61 percent after going as low as 0.55 percent.

Stock market volumes have been subdued in recent sessions ahead of the details of the April 28th-29th policy meeting and as the quarterly earnings season draws to a close. While the Fed is broadly expected to raise rates this year, the timing of the move has kept the market on tenterhooks.