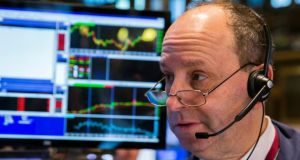 A trader works on the floor of the New York Stock Exchange shortly after the opening bell in New York. Photograp: Lucas Jackson/Reuters

The euro edged higher, on course for a third week of gains, its best performance in just under a year against the dollar.

Germany’s economy grew by a much stronger than expected 0.7 per cent in the fourth quarter, a figure described by one economist as a “thunderbolt” that pointed to a stronger 2015 and that would fuel optimism for the broader euro zone economy.

The news added to optimism over Greece’s debt stand-off with its creditors, as prime minister Alexis Tsipras agreed to meet their representatives ahead of a much-anticipated gathering of euro zone finance ministers on Monday.

“The surprisingly robust figure from Germany is fuelling the hopes that Europe is finally turning the corner,” said Saxo Bank trader Pierre Martin.

“With the excellent earnings season we have, we just needed a bit of improvement on the macro front to revive the rally, and now we have it.”

The pan-European FTSEurofirst 300 equity index rose 0.6 per cent and hit a seven- year high, while the German DAX index hit a record high. The MSCI All-Country World index was up 0.4 per cent, heading for a second straight week of gains.

Increased confidence in a recovery saw investors turn to lower-rated debt, with yields on Portuguese, Italian and Spanish 10- year bonds down while their German equivalents rose slightly.

Greek borrowing costs also fell and shares rose, with Greek bank stocks sharply up between 12 and 16 per cent as investors held out hope that next week’s meeting could see Athens reach a deal with its creditors.

The positive mood followed on from a rally in Asia, where shares soared on news of a ceasefire accord in Ukraine and risk appetite got a lift from Sweden’s interest-rate cut.

Emerging- markets stocks were at a one-week high, heading for a second straight week of gains, with Russian dollar-denominated stocks at a two-month high.

London copper prices hit a three-week high, buoyed by a weaker dollar, while Brent crude hovered around $60 a barrel, up almost 4 percent this week as news of deeper industry spending cuts and a sinking U.S. dollar revived buying.