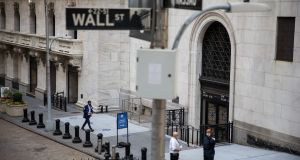 European stocks slid into negative territory after the US Federal Reserve signalled its ongoing concern about the effect of the pandemic on the world’s biggest economy.

Minutes of Fed open markets committee meeting hinted it was not immediately prepared to deploy further unconventional measures to shore up the US economy, putting pressure on equities. Wall Street itself, however, soon rebounded as tech stocks edged higher.

The Iseq index closed 1.5 per cent lower in line with the decline for European markets. Building materials group CRH, the largest stock on the Dublin market, fell 1.9 per cent, weakening over the course of the session as investors digested its first-half earnings announcement. The company reported a 28 per cent slide in first-half profits and said Covid-19 had materially hit its operations.

Ryanair saw a reversal of Wednesday’s gains, with the stock dropping 3.3 per cent to €11.16. Aryzta also lost ground, with the Swiss-Irish bakery group falling 3.4 per cent to 51 cent.

The FTSE 100 of blue-chip stocks fell 1.6 per cent, while the more domestically focused FTSE 250 was 0.5 per cent lower.

Royal Dutch Shell fell 2.3 per cent. The Anglo-Dutch oil company said it is considering a sale of a Norwegian natural gas supplier, extending a trend for energy giants to selectively dispose of assets.

The Stoxx Europe 600 index fell 1.1 per cent, as Wednesday’s upbeat tone was undone. In Germany, the Dax closed down 1.1 per cent, while France’s Cac 40 index was 1.3 per cent lower. Spanish and Italian stocks also finished in the red.

French hotel owner Accor edged up 2.5 per cent in Paris as it considered a possible merger with UK rival InterContinental Hotels Group, which added 0.85 per cent in London.

German airline Lufthansa dropped 2.9 per cent as airlines softened, while European car stocks including Volkswagen, Volvo and BMW were also in decline.

US stocks rose as a rebound in technology companies tempered investors’ concerns about lasting economic damage from the pandemic. Equities had initially slumped as applications for unemployment benefits unexpectedly increased, adding to suspicion that the stock market bullishness was out of kilter with prospects for economic recovery.

But some momentum gathered as China confirmed plans to talk with US officials to review progress on a preliminary trade deal.

The tech rally offset a slide in energy producers and banks in the S&P 500, while the Nasdaq 100 of heavyweights such as Apple and Tesla climbed toward a record. Apple traded 1.4 per cent higher at 5.30pm Irish time, while Microsoft was up 1.1 per cent and Facebook 1.2 per cent. Tesla advanced more than 6 per cent.

Intel – the world’s largest chipmaker – jumped after it entered into accelerated agreements to buy back $10 billion of shares.

Beauty company Estée Lauder fell as much as 8.6 per cent after announcing it would cut jobs and close stores as part of a multiyear restructuring plan prompted by pandemic disruption. – Additional reporting: Bloomberg/Reuters