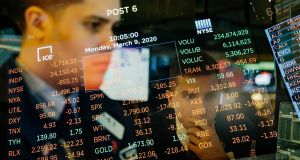 HSBC and Nokia dragged European shares lower on Wednesday as a surge in coronavirus cases appeared to threaten a recovery in the global economy, while Britain’s plan to head off an unemployment crisis cushioned a fall in London’s domestically-focused stocks.

The pan-European Stoxx 600 fell 0.7 per cent with banks , travel and leisure and auto stocks dragging. Limiting losses were gains in basic material stocks and utilities. The UK mid-caps index cut some session losses before closing 1 per cent down, after finance minister Rishi Sunak promised an additional £30 billion in stimulus. This included bonuses to get furloughed staff back to work and a cut in value added tax for the hospitality sector.

Economists and strategists at ING said that, while the announcements were innovative, they were unlikely to completely change the game for the UK’s economic outlook and would provide only a small respite for markets.

Dublin’s main index fell 1.7 per cent to 6,038, roughly tracking trends elsewhere. The State’s two main banks once again led the slide. Bank of Ireland was 3.5 per cent down at €1.80 while rival AIB was down by a similar amount at €1.13. Both lenders have suffered disproportionate in the crisis amid fears they will see a surge in loan defaults.

Ryanair was the other big loser, falling nearly 5 per cent to €10.62, as a renewed surge in coronavirus cases placed fresh doubts on whether the airline industry could resume.

Building materials giant CRH, which is plugged into the US economy, fell 2 per cent to €31.65. Struggling Swiss-Irish food group Aryzta, which owns the Cuisine de France label here, was down 4.5 per cent at 39 cent. Falling house prices sent shares in Cairn Homes 2.2 per cent lower. According to property website Daft.ie, the price of homes was 3.3 per cent lower in June compared with the same month a year ago.

London shares slid for the second straight session on Wednesday as another jump in global Covid-19 cases overshadowed hopes of an economic rebound, even as stimulus poured in to help steer the economy away from an unemployment crisis. The blue-chip FTSE 100 slipped 0.6 per cent and the mid-cap FTSE 250 fell 0.9 per cent, with banks and transport indexes leading declines.

Rishi Sunak promised an additional £30 billion on Wednesday, funnelling money to employers, homebuyers and hospitality firms to drive a recovery. The move was initially well-received by investors but concerns over surging coronavirus cases governed sentiment to the day’s close.

FirstGroup tumbled 23.1 per cent to its lowest in more than three months after the bus and rail operator warned its future was in doubt after a collapse in passenger numbers led to a £153 million loss in the year to March.

On the Stoxx 600, Nokia was the worst performer, slumping 8.1 per cent on concerns that it was losing the business of its key client Verizon in the United States. JPMorgan downgraded it to “neutral”. Pressuring hopes for global recovery, the US coronavirus outbreak crossed a grim milestone of more than three million confirmed cases, while the World Health Organisation acknowledged “evidence emerging” that the virus could spread through the air.

The Stoxx 600 had climbed to a near one-month high earlier this week as improving economic data and bets of a swift rebound in China drove gains, but investors remained cautious about the progress of a European Union recovery fund and the upcoming earnings season. Analysts expect companies listed on the Stoxx 600 to report a 53.9 per cent decline in profit in the second quarter, according to Refinitiv data.

Denmark’s Orsted jumped 4.8 per cent after signing the world’s largest corporate renewable power deal with Taiwan Semiconductor Manufacturing. The UK online fashion retailer Boohoo slumped for the sixth day running, hit by news that Next, Zalando and Amazon were delisting its products.

Wall Street’s major indexes edged higher in choppy trading on Wednesday, supported by technology shares as early signs of an economic rebound overrode fears of another lockdown due to a jump in coronavirus cases across the country. Apple and Microsoft provided the biggest boost to all three indexes. The technology index rose 1.1 per cent, the most among the 11 major S&P sectors.

“People are debating whether or not the low in the economy has actually been reached so they’re sticking with growth stocks and that’s technology,” said Robert Pavlik, senior portfolio manager at SlateStone Wealth in New York.

Markets also appeared to be in a wait-and-watch mode before the beginning of the second-quarter earnings season, which kicks off next week with reports from the big Wall Street banks. Quarterly earnings for S&P 500 companies are expected to decline about 44 per cent year on year, the steepest drop since the 2008 financial crisis, according to IBES Refinitiv data. – Additional reporting: Reuters