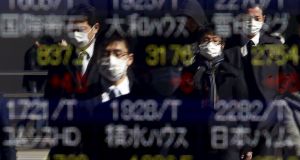 Pedestrians wearing masks are reflected in an electronic board showing various stock prices outside a brokerage in Tokyo, Japan. Photograph: Yuya Shino/Reuters

European shares fell back on Thursday, with chemicals maker Evonik among the heaviest fallers, after five straight days of gains brought a top European equity index to a one-month high.

The pan-European FTSEurofirst 300 was down 0.49 per cent at 1,335.25 points, having hit its highest since early February in the previous session. After a turbulent start to the year due to worries about global growth and the health of the banking sector, European equities markets have enjoyed a recent rally as oil prices recovered and fears over a US slowdown eased.

“For markets to continue to move higher more good data - especially out of the U.S. - will be needed,” said Markus Huber, a trader at City of London Markets. The FTSEurofirst remains down 7 per cent so far this year. Evonik tumbled 12 percent after flagging an up to 19 per cent decline in 2016 adjusted core earnings, hurt by falling prices at its poultry feed ingredients business, its main profit driver last year.

“Our earnings estimates have to be adjusted downward significantly,” said DZ Bank, which has a “buy” rating on the stock. Sportswear maker Adidas fell 0.6 percent after reporting a larger than-expected net loss for the fourth quarter as sales rose 15 per cent, broadly in line with expectations.

Baader Bank Helvea said the results delivered no surprises, confirming its buy rating on the stock. But Schroders rose 2.7 per cent after the British asset manager posted forecast-beating results thanks to strong investor inflows. It also unveiled a sweeping boardroom shake-up, with chief executive Michael Dobson taking over as chairman. JC Decaux surged 5.9 per cent after the French advertising company forecast organic revenue growth of around 9 per cent in the first quarter of this year and proposed a 12 per cent hike in its 2015 dividend.

Healthcare stocks were the top losers down 1.6 per cent, while miners were up 1 per cent as London copper prices hit their highest since mid-November.