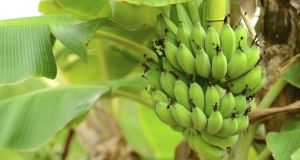 European shares fell to near a four-week low on Friday as political worries put pressure on cyclical stocks on the last trading day of the week.

Investors are jittery before a June 23rd referendum in the UK on whether it will remain a member of the EU. Bookmakers’ odds suggest those voting to remain in the EU will win, but polls suggest a tight race.

The Stoxx Europe 600 Index lost 2.4 per cent at the close of trading, deepening its worst weekly drop in a month to 2.5 per cent.

Bank of Ireland lost 2 per cent to 24.4 cents, with the stock sold off heavily during the week, as it is the most exposed Irish lender to the UK.

Permanent TSB was also out of sorts, slumping 3.7 per cent to €2.18, as investors continued to digest news that one of the advisers on the bank’s IPO last year, Keefe, Bruyette & Woods, had downgraded its stance on the stock to underperform. It set a €2.20 price target for the shares, which floated at €4.50 at the time of the IPO.

The FTSE 100 index was down 1.9 per cent at 6,115.13 points at its close, hitting a three-week low and posting its biggest daily loss in four months.

Tesco dropped 4 per cent after it agreed to sell its Turkish business and Giraffe restaurant chain in the UK.

A retreat in metals and oil prices also knocked back the shares of mining and energy companies such as BP and BHP Billiton.

London copper ticked lower on Friday and was hovering near four-month lows as headwinds from a likely mid-term US rate hike that have boosted the dollar added to pressure from tepid physical demand in top user China.

Away from the blue chips, Deutsche Bank downgrades to recruitment companies PageGroup and Hays sent the stocks down 6.6 per cent and 6.2 per cent lower respectively.

Italian bank UniCredit fell 6.4 per cent after its chairman said a new chief executive to replace Federico Ghizzoni would not be chosen before the end of July.

Financials and other cyclicals were hit hard, with European insurance, banking, construction and travel indexes falling between 2.5 per cent and 3.6 per cent.

After three days of gains, losses in the past two sessions have pushed the Nasdaq into the red for the week, while the S&P 500 and the Dow Jones Industrial Average are roughly flat.

Oil prices fell 2.5 per cent as traders booked profits after a rally earlier this week pushed prices to their highest in 2016, and as the dollar regained lost ground.