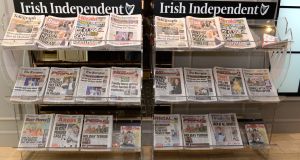 European shares closed little changed as a decline in banks after disappointing earnings was countered by gains in oil stocks and a 21 per cent surge in chipmaker AMS.

US stocks pared their advance for the month, however, as disappointing results from Google parent Alphabet weighed on technology companies amid angst over US-China trade talks.

The Iseq index nudged up on a day when the main corporate news concerned publisher Independent News & Media (INM). Some 20 million shares traded in the group as businessmen Denis O’Brien and Dermot Desmond each sold more than half their stakes to Mediahuis, making the Belgian group’s bid for INM seem like a done deal, one Dublin trader noted.

Ryanair fell 0.9 per cent on a day when German airline Lufthansa said it would halt capacity expansion at low-cost arm Eurowings, but signalled that the airline sector’s fortunes would likely improve this year.

Smurfit Kappa declined 3.65 per cent to €26.13 ahead of its quarterly earnings update on Friday and an update from British packaging company DS Smith, while troubled Datalex made a surprise 10.9 per cent jump to just below 92 cent ahead of its temporary trading suspension.

As a result of its takeover by Euronext, the Dublin market will be closed on Wednesday for the European May Day holiday.

The FTSE 100 underperformed other major European markets, declining 0.3 per cent as miner Glencore posed a drag on the blue-chip index, while an unexpected slowdown in China’s April factory activity and a stronger pound also took their toll.

Glencore dropped 2.6 per cent as severe flooding in Australia led it to lower its 2019 copper output target.

Whitbread, the owner of Premier Inn, fell 6.2 per cent on its worst day in more than two years after forecasting weak room revenue growth in the UK.

Asia-exposed Standard Chartered advanced after it announced plans for up to $1 billion of share buybacks, the bank’s first in at least 20 years.

The pan-European Stoxx 600 index was flat at the close after oscillating between positive and negative territory throughout the day. For the month of April, the Stoxx 600 rose 3.2 per cent, extending gains through a fourth straight month.

Danske Bank, caught up in a massive money laundering scandal, fell nearly 10 per cent as it lowered its 2019 outlook after a disappointing first quarter. Banco Santander slipped after first-quarter net profit dropped.

Rising fuel costs and excess capacity in Europe dragged Germany’s Lufthansa into a first-quarter loss and the stock shed 3 per cent.

Austrian Apple supplier AMS soared 21.2 per cent, and posted its biggest one-day jump since October 2017 after it beat forecasts for first-quarter profit and gave an upbeat outlook for the second quarter.

Wall Street’s main indexes on Tuesday slipped from all-time highs set in the previous session, after a slump in the shares of Alphabet following a revenue miss and a drop in Apple ahead of its results.

Alphabet shares tumbled 8.56 per cent and were on track for their worst decline since December 2008, after the Google owner also posted its slowest revenue growth in three years.

Apple dropped 2.46 per cent ahead of results later in the day, while shares of Amazon, Facebook and Netflix also slipped.

General Electric jumped 3.5 per cent after the industrial conglomerate’s first-quarter profit rose and it lost less cash than expected. Mastercard rose 1.6 per cent to a record high after the card company beat estimates for quarterly profit. – Additional reporting: Reuters.