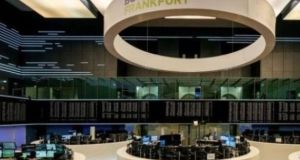 The German DAX rose 0.7% to add to its recent record-setting rally

Europe’s benchmark equity index closed at a record high on Tuesday, recovering all of its pandemic-driven losses as investors bet on a speedy global economic recovery, spurred by bumper stimulus spending and Covid-19 vaccination programmes.

The Iseq index was broadly in line with European peers, closing up 0.6 per cent at 8153.37 with low volumes traded.

Dalata continued to rebound, jumping 5.1 per cent to €4.50, making it the biggest gainer on the day locally.

Airlines were higher generally although Ryanair was weaker than many of its peers, up 0.4 per cent to €16.95.

British shares ended higher, led by heavyweight commodity-focussed stocks, while prospects of a planned economic reopening from a coronavirus lockdown starting next week helped boost sentiment towards beaten down travel and leisure shares.

The blue-chip FTSE 100 index ended up 1.3 per cent at its highest since early January.

Energy group BP gained 3.5 per cent and was the biggest boost to the index after saying it expects to reach its $35 billion net debt target in the first quarter of 2021.

Consumer goods manufacturers Unilever and Diageo also led gains to the FTSE 100, adding 1.6 per cent and 2.5 per cent respectively.

European traders returned from a long weekend to push the STOXX 600 up 0.7 per cent to 435.36 points. It has climbed more than 60 per cent from last year’s lows and surpassed its previous all-time high of 433.90 points in February 2020.

The German DAX rose 0.7 per cent to add to its recent record-setting rally, France’s CAC 40 was up 0.5 per cent, also fully recovering from last year’s crash.

Miners were the top gainers, up 1.8 per cent, while travel and leisure stocks, carmakers and food and beverage shares rose 1 per cent.

Swiss bank Credit Suisse slipped 0.4 per cent after sharp losses last week as it announced an estimated loss of 4.4 billion Swiss francs from its relationship with Archegos Capital Management.

The S&P 500 hit a record high for the fourth straight session on Tuesday as economy-linked and tech stocks gained ground on confidence that the US economy is on its path to a roaring rebound.

The S&P 500 and the Dow reached record levels, with the CBOE volatility index retreating to pre-pandemic lows, driven by fiscal stimulus packages and swift Covid-19 vaccinations in the United States that led to blowout employment as well as service sector reports for March.

Snap jumped 5.3 per cent after Atlantic Equities upgraded its rating on the photo-messaging app owner’s shares to “overweight” from “neutral”.

Norwegian Cruise Line Holdings added 5.5 per cent as it said it would begin sailing outside the United States from the Caribbean and Greek Isles in July, restarting trips after a year-long hiatus brought on by the pandemic.

Illumina gained 8.5 per cent after the gene-sequencing company set current-quarter revenue target ahead of analysts’ expectations.