Iseq nudges down a fraction on light trading 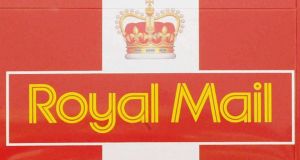 Conditional trading in Royal Mail began in London yesterday, with the shares surging 33 per cent to £4.38

Trading was choppy across the globe yesterday, according to traders, as investors struggled to decipher signals from Washington about the prospects of an end to the US Federal government shutdown.

US stocks edged up throughout the day following the biggest rally in more than nine months the previous day, on rumours of a temporary end to the deadlock. Uncertainty about whether progress will be made over the weekend contributed to yesterday’s caution.UK stocks climbed for a second day, with the FTSE 100 rising 0.3 per cent, while the Iseq dropped 0.3 per cent on light volumes. Germany’s DAX increased 1 per cent to a record high, while France’s CAC 40 rose 1.2 per cent.

DUBLIN
Glanbia, the Kilkenny-based dairy producer, came under pressure for the second day running, according to traders. Societe Generale issued a sell recommendation on the share, spooking investors. The stock closed down more than two per cent to €9.45.

Kenmare Resources, the mining company with significant operations in Mozambique, plummeted by more than 10 per cent after it raised £66 million to cover short-term liquidity needs. It reports in sterling.

Independent News & Media climbed for the second day, advancing almost 3 per cent. The company has revisited plans for the introduction of a website paywall after it said visitor numbers had been higher so far this year than expected.

LONDON
Conditional trading in Royal Mail began in London yesterday. The shares surged 33 per cent to £4.38. The UK government said institutional investors will get 67 per cent of the stock in the initial public offering, down from the planned allocation of 70 per cent. The remaining 33 per cent will go to small retail investors. The IPO raised £1.7 billion.

Standard Life, the British insurer that is also highly active in the Irish market, advanced 2.4 per cent to £3.54 after JPMorgan added it to a list of recommended stocks.

Whitbread, the brewery, pubs and hotels operator, climbed 8.4 per cent as brokerages including Oriel Securities and Citigroup increased their ratings on the company. Oriel cited an improvement in the hotel market, while Citigroup said rebounding economic sentiment in Europe will lead to earnings upgrades. Whitbread has rallied 31 per cent so far this year.

EUROPE
Celesio, the German drugs giant that owns the Lloyds chain of pharmacies in Ireland, jumped 19 per cent, its biggest rally in more than 15 years. McKesson, the largest US drug distributor, may acquire a majority stake in Celesio, Dow Jones reported.

TGS, a Norwegian surveyor of oil and gas fields, slumped 16 per cent. Sales for the full year will probably not exceed $870 million, the company said. That’s down from a previous revenue forecast of between $920 million and $1 billion.

Delhaize fell 7.5 per cent after saying Stefan Descheemaeker will step down as chief executive for Europe at the end of the month. Finance chief Pierre Bouchut may also leave the Belgian retailer for Veolia Environnement, according to a French newspaper report.

NEW YORK
Safeway, the second-largest US grocery-store chain, rose 5.7 per cent to $33.38. The company said identical-store sales will rise as much as 1.9 per cent this year. It also announced it is to quit the city of Chicago and will sell all of its stores there.

Wells Fargo slipped 1 per cent to $41.05 after a trading update. While profit rose in the third quarter, it posted declines in revenue, net interest margin and its pipeline of new mortgage loans.

JPMorgan Chase fell a fraction to $52.50 after the bank reported its first quarterly loss under chief Jamie Dimon because of a $7.2 billion legal charge. Excluding the litigation expense and a reserve release, it earned a profit of $5.82 billion.