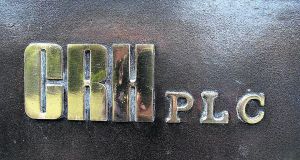 Iseq heavyweight CRH was down 0.73 per cent at ¤16.405. However the group outperformed its peers

European stocks plunged yesterday as the US Federal Reserve signalled it will scale back its stimulus if the US economy improves and as data showed Chinese manufacturing shrank.

“This morning we got the perfect storm for risky assets, with negative signals from both monetary policy and macro-fundamentals,” Witold Bahrke, who helps oversee $55 billion as senior strategist at PFA Pension in Copenhagen, noted in a message.

Fed chairman Ben Bernanke told US lawmakers that the flow of purchases could be reduced “in the next few meetings” if the Fed is confident gains in the economy can be sustained.

DUBLIN
Resilient performances from a number of bigger stocks meant that the Irish market did not suffer as much as its European peers, although it was still markedly down – around 0.7 per cent – at the close of business.

Index heavyweight international building materials group CRH was down 0.73 per cent at €16.405. The group outperformed its peers, many of which slipped by 2 per cent to 3 per cent yesterday.

Titanium miner Kenmare tumbled 1.88 per cent to 36.6 cent following news that one of the big players in its sector, Iluka, is to step up production of zircon, one of the minerals that it extracts from its Mozambique mine.

Pharmaceutical developer Elan rose 2.48 per cent after US-based Royalty Pharma said it would lower the threshold for acceptances of its $6.4 billion bid for the company to 50 per cent plus one.

LONDON
Tullow Oil fell 3.26 per cent to 1,038 pence sterling. The Irish-connected explorer yesterday announced that a wildcat well drilled by its partner Lundin Petroleum in the Carlsberg prospect in Norwegian waters turned out to be a dry hole. Traders suggested that the reaction was overdone.

Irish food group Greencore, which delisted from Dublin earlier this year, put in a stellar performance against the background of a falling market, gaining 3.14 per cent to close at 131.50 pence.

UBS, Switzerland’s largest lender, lost 3.8 per cent to 17.32 Swiss francs. SBM Offshore rose 3.6 per cent to €14.23, for the biggest gain on the Stoxx 600. The world’s largest supplier of floating oil rigs reported a 35 per cent rise in first-quarter revenue to $1 billion.

Ralph Lauren slipped 2.4 per cent to $183.54. The retailer of brand clothing forecast sales in the current fiscal year to rise 4 per cent to 7 per cent, trailing predictions that pitched it at 10 per cent .

Hewlett-Packard jumped 14 per cent to $24.26 as the largest maker of personal computers said earnings excluding some items will be in the range of 84 cents to 87 cents a share in the three months through July. Analysts on average project 83 cents. – Additional reporting Bloomberg