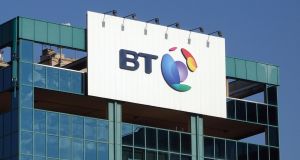 BT shares fell as the telecoms giant warned on profits after accounting irregularities at its Italian division. Photograph: Stefano Rellandini/Reuters

European stocks rose as commodity producers led an advance in cyclical shares while those deemed more immune to the economy trailed.

Across Europe, the French Cac 40 rose nearly 0.2 per cent and the German Dax rose 0.4 per cent. The Iseq in Dublin was down 1.3 per cent.

London’s top flight index, the FTSE 100, ended flat after it was held back by a huge plunge in BT shares .

US stocks advanced after homebuilder’s earnings topped estimates in a sign the tighter labour market is boosting consumers.

The dollar slipped, sending a gauge of commodities to a seven-month high.

Aryzta lowered its earnings per share guidance by a fifth, just two months after its last trading update. It was more than 30 per cent in the red by 9.30am and its day did not get any better after that.

Bank of Ireland staged an afternoon recovery after a morning spent in the red, as it finished the session up 2.5 per cent on the back of ebullience among European bank shares sparked by Italy’s Generali.

Kerry group fell more than 1.2 per cent as prices rose for commodities.

BT shares fell 79.55p to 303p. The telecoms giant warned on profits after saying it expects to take a £530 million hit after accounting irregularities at its Italian division resulted in an overstatement of earnings at the division over a number of years. The figure was revised up from a previous estimate of £145 million.

Centrica shares fell after its British Gas Business agreed to pay a £9.5 million penalty after the energy watchdog said it “let customers down” following billing and complaints issues.

HSBC rose 2.7p to 672.8p after the high street lender said it would shut a further 62 bank branches on top of the 55 closures announced last year. It also announced that 204 IT jobs would be lost to cost cuts by year-end.

Dixons Carphone shares fell 21.1p to 315p despite notching up a 6 per cent surge in like-for-like sales across stores in the UK and Ireland over the 10 weeks to January 7th, with analysts saying that 2017 could prove a more challenge year for the retailer.

Shares in easyJet fell 95p to 981p after revealing another £35 million hit from the weak pound, and a financial impact in the “low millions” following last month’s Christmas market attack in Berlin.

Italian bank Generali jumped 8.2 per cent after a report that Intesa Sanpaolo is considering making an all-stock offer for it, a bid that analysts say is unlikely to succeed.

The surge helped Italy’s index be the standout performer across Europe on Tuesday, up 1 per cent as Generali’s biggest shareholder Mediobanca also rallied 7.4 percent.

The share price of German company SAP, Europe’s most valuable technology business, held firm on Tuesday despite disappointing analysts with its 2016 results.

It raised its outlook, saying challenges to global trade presented by Donald Trump’s new US administration would drive sales of its business planning tools.

The S&P 500 Index extended gains in afternoon trading, looking to break out of a range that’s seen it move no more than 0.35 per cent in either direction on a closing basis since January 4th.

An S&P measure of housing stocks surged 4.7 per cent on DR Horton’s results, while DuPont led gains in the Dow Jones Industrial Average.

DuPont rose 4.1 per cent after its results topped estimates and the company said it would delay its expected closing of a merger with Dow Chemical Co.

JNJ and Verizon Communications slumped more than 1.8 per cent to lead losses in the Dow.