Tesla cuts 9% of workforce in search for profit 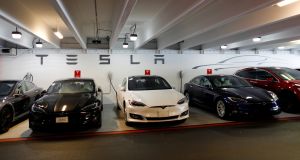 Tesla Model 3s and Xs are shown charging in an underground parking lot next to a Tesla store in San Diego, California. Photograph: Mike Blake/Reuters

Tesla is cutting 9 per cent of jobs across the company in a major restructuring that the electric carmaker insists will not impact its struggling production of the Model 3.

Elon Musk, chief executive, tweeted on Tuesday that the move was “difficult but necessary” as the company looks to contain costs while simultaneously increasing output of its latest model. The cuts amount to nearly 3,400 people, based on the 37,543 workers Tesla had at the end of last year.

“These cuts were almost entirely made from our salaried population and no production associates were included, so this will not affect our ability to reach Model 3 production targets in the coming months,” Mr Musk wrote in an internal email to employees.

He wrote that Tesla would provide “significant salary and stock vesting” to staff who leave.

“I also want to emphasise that we are making this hard decision now so that we never have to do this again,” he added in the memo.

The jobs cuts – thought to be the first company-wide cuts in Tesla’s 15-year history – come at a critical time as Mr Musk tries to convince investors that he can reach a sustainable financial position without needing to return to Wall Street to raise more money. He has said Tesla would have positive cash flow and profits in the final two quarters of this year, though the projection has not stopped many analysts from arguing that Tesla needs extra capital.

Mr Musk first hinted at the cuts in an investor call early last month. The restructuring has come amid signs of internal upheaval, after a series of key executives left the company. The Tesla boss has tried to paint the executive departures as part of an organised overhaul, and said on Tuesday that he had been “conducting a comprehensive organisational restructuring”, in part to get rid of “some duplication of roles and some job functions” that had built up during the company’s rapid growth.

In a memo announcing the restructuring, Mr Musk also pointed to a break with Tesla’s past strategy. Until now the lossmaking company has been in a race for growth, funded by frequent returns to the capital markets.

But Mr Musk said Tesla would never achieve its mission of accelerating “the world’s transition to sustainable, clean energy” unless it proves it can become “sustainably profitable”.

He added: “That is a valid and fair criticism of Tesla’s history to date.”

Increasing output of the Model 3, which went into production a year ago, has involved a jump in costs this year, putting further pressure on the company to slice its overheads.

Mr Musk added a third shift at the company’s plant on the east side of the San Francisco bay and has given the green light to expensive remedial actions to overcome serious manufacturing bottlenecks. These included building an entirely new automated assembly line in Germany before having it flown to the US and reassembled.

Covid tax bill rush cripples Revenue website 17:16
Pfizer to reduce vaccine deliveries to Europe 16:56
France issues ‘clear and final no’ over Carrefour takeover bid 16:11
General Electric accuses Siemens Energy of stealing trade secrets 16:07
Time for Malin to decide what it wants to be when it grows up 15:56
Search executive
jobs on irishtimes.com