Rolls-Royce to outline plan for annual cost savings of £200m 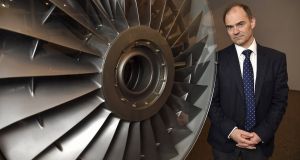 Rolls-Royce’s new chief executive Warren East: He was forced to issue a profits warning on only his second day in the job and later in the year shocked the market when he admitted that he could not rule out another warning. Photograph: Toby Melville/Reuters

When Rolls-Royce last cut its dividend, in 1992, Britain was mired in a long-running recession, Bohemian Rhapsody by Queen was topping the charts and it was shaping up to be an “annus horribilis” for the other queen and her family.

Almost 25 years later, it is certainly going to be a horrible year for the former pride of Britain’s engineering industry.

Rolls-Royce has already hit the market with five profit warnings in less than two years and looks certain to slash its dividend payment to shareholders when it reports full year figures on Friday. New chief executive Warren East has already warned investors that their payout for 2015 is under review and analysts are expecting it to be slashed by 30 per cent, to 17p a share, with a further cut to 16p a share in 2016.

Profits for last year are forecast to fall by £300 million to about £1.3 billion but could plunge to just half that level in the current year.

While the dividend cut is widely expected in the market, nervousness ahead of Friday’s figures saw shares in Rolls-Royce fall to a five-year low of just over 500p this week.

Most analysts believe East will be able to avoid profit warning number six on Friday, although given his earlier complaints about lack of transparency in Rolls-Royce’s operations, a warning cannot be completely ruled out.

And there are some who fear the new boss may decide to take even more drastic action on the dividend, axing it altogether until the group’s financial position is stronger. Scrapping the dividend entirely would save the group a much-needed £425 million.

That will be bad news for Rolls-Royce shareholders but it will be bad news, too, for Britain’s pension funds, already suffering from the dire performance of equity markets since the start of the year.

Although the major oil companies decided against taking the axe to their dividends despite plunging profits, the battered mining sector may not be able to follow suit, given the extent of the commodities slump, and cuts look to be on the way at Rio Tinto and BHP Billiton.

A few more orders like that would be welcome for the Rolls-Royce boss as he battles to restore the group’s fortunes. In the meantime, he’s expected to spend Friday explaining how he intends to make cost savings of some £200 million a year.

Several thousand jobs have already been axed and a shake-up of senior management is on the way. Fiona Walsh is business editor of theguardian.com