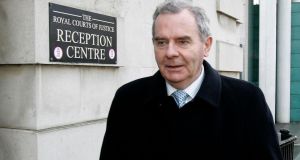 Former billionaire Sean Quinn, who is due to emerge from a three-year term of bankruptcy later this week. Photograph: Dara Mac Dónaill / The Irish Times

The preferred bidder for the former Quinn Group glass business on the Cavan-Fermanagh border has promised to maintain employment in the plant, the current owner of the business has said.

The statement from the Aventas Group, which took over the business in the wake of the Quinn family losing control to Anglo Irish Bank in 2011, came as a meeting is planned for Ballyconnell, Co Cavan, tonight to galvanise support for resisting the sale of the plant in neighbouring Derrylin, Co Fermanagh.

The Spanish family-owned business Vidrala looks set to acquire the former Quinn Group glass plants in Elton, Cheshire, and in Derrylin, in a deal thought to be valued at approximately €400 million.

Already the construction materials divisions of the plants in Derrylin have been sold to a local interest group, backed by former bondholders, in a deal worth about €100 million.

Signs have been erected along the Ballyconnell-Derrylin road saying: “Glass Grabbers Not Welcome Here”.

A Facebook page that has campaigned for local control of the former Quinn Group manufacturing divisions has urged people to come to tonight’s meeting.

Five formal funded bids were received and Aventas was in advanced talks with the preferred bidder, it said. While an expression of interest was received in October 2014 from an adviser who said he represented “a local group”, no formal bid was received and he had not been heard from since November.

The preferred bidder had no other plants in Britain or Ireland and, Aventas said, had “said in the strongest possible terms that it is of the utmost importance to them to integrate with the local communities, keep employment in the relevant regions ”.

The statement was welcomed by regional secretary with the United trade union Jimmy Kelly, who said that in the absence of a credible, local management bid, it was critical that the workers received assurances on the long-term commitment of the preferred bidders.

Dior to open boutique in Brown Thomas later this year 14:59
Davy chief executive and deputy chairman resign in fallout from €4.1m Central Bank fine 13:57
Liam Carroll’s legacy in property market will be debated for years to come 05:41
Officials may release beef carcasses from a herd whose location was unknown 05:31
Women on Air calls for ‘hard data’ and broadcasting quotas 05:23
Search executive
jobs on irishtimes.com