Portwest on target to achieve record sales this year 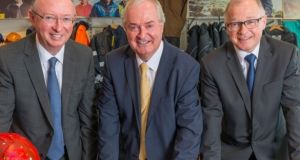 Harry, Cathal and Owen Hughes of Portwest: the company is continuing to show strong growth, expanding in Australia with two acquisitions this year alone

Portwest, the Co Mayo-headquartered speciality clothing company owned by EY Entrepreneur of the Year award winner Harry Hughes and his brothers, is on target for a record year with turnover in excess of €160 million expected in 2017.

Headquartered in Westport and jointly run by Mr Hughes and his brothers Cathal and Owen, the company designs and manufactures personal protective equipment, workwear and outdoor leisurewear that is sold in more than 100 countries worldwide.

Founded in 1904 by Charles Hughes, the firm employs more than 2,000 people globally.

To top off a good year, Mr Hughes scooped top honours in the Best International Entrepreneur category and was named overall winner in the EY Entrepreneur of the Year awards in late October. The Hughes brothers also completed a deal to acquire the 455-acre Westport House and estate.

The company is continuing to show strong growth, expanding in Australia with two acquisitions this year alone. It is ultimately targeting sales of €1 billion.

Mr Hughes told The Irish Times that Portwest was looking to achieve growth of at least 20 per cent to 25 per cent.

“To support this growth we have just signed a lease for a new 14,700sq m warehouse in Poland and launched a new 600-page catalogue with 1,300 products,” he said.