One51 shareholders pave way to flotation 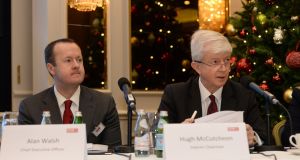 One51 shareholders paved the way for a possible stock market launch of the plastics maker at a meeting on Wednesday.

The vote came after One51 said that reduced demand from a large customer and delays in preparations to supply clients from a new facility in Cork had hit Irish operations.

The Dublin-based company, which employs about 1,900 people making plastic containers in Ireland, Britain, North America and Asia, said earnings would be broadly in line with expectations despite a slowdown in some businesses in recent months.

Shareholders backed eight resolutions that will allow One51 to go for an initial public offering (IPO) of its shares on the Dublin and Toronto stock exchanges. They also agreed to rename the company IPL Plastics from Thursday.

One51 shares already trade on the grey, or unofficial, market in Dublin

Chief executive Alan Walsh stressed that an IPO would depend on market conditions and other factors. Speaking after the meeting, he said that, if it goes ahead, it would most likely be midway through 2018.

He also signalled that One51 would be in the market to buy a European rival after any stock market launch. “The big gap in our business is continental Europe, that’s something that we would like to rebalance,” he said.

The key proposal passed at the meeting allows Canadian investors CDPQ and FSTQ to swap their combined one-third holding in plastics manufacturer, IPL, majority owned by the Irish group, for 47 million new shares in what would be an enlarged One51/IPL Plastics.

Mr Walsh noted that the transaction would value the Canadian investors’ One51 shares at just over €2.50 each. He stressed that that this did not mean that the group would price its stock at this level should it launch on the market.

The existing structure ring fences Canada-based IPL from One51. The share swap will integrate the two companies into one group.

“We cannot IPO the business with the current structure because we cannot access the cash flows from the Canadian plastics business,” Mr Walsh explained.

The swap will also rid One51 of a potential obligation to buy the Canadians’ stake in IPL under an agreement dating back to the Irish company’s purchase of its majority holding in 2015.

One51 has to treat this as a liability on its balance sheet. Mr Walsh pointed out that this could amount to €120 million by the end of this year.

Shareholders expressed concern about €2.5 million worth of loan notes held by mainly elderly investors. The company does not have to repay the money, but the notes carry a perpetual 4 per cent dividend and can be converted to shares in the company.

Michael Keogh, acting as proxy for loan note holder, Breda Foley, asked One51 to look at finding a way to repay the holders their cash. “This may well be subject to a legal challenge,” he added.

Mr Walsh pointed out that the loans did not have to be repaid. He did not rule out looking for a solution and suggested that the group’s annual general meeting should discuss it.