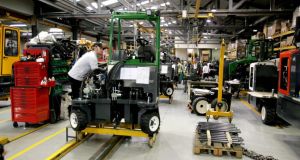 A Monaghan-based forklift manufacturer has unveiled plans for a new €40 mil factory which will create 200 new jobs over the next five years.

Combilif exports lifting machinery to 75 countries from its existing plants at Clontibret and Monaghan town.

The company, which already employs 300 staff, is hoping to double its current turnover of €150 million within five years on the back of strong sales.

Its new factory, which is to be built near the Monaghan bypass in an investment supported by the Department of Enterprise, Jobs and Innovation, is due to be completed within the next two years.

The majority of the 200 jobs to be created in the next five years will be for skilled technicians and design engineers, the company said.

Taoiseach Enda Kenny said: “Supporting recovery in the regions is behind this fantastic announcement today of an additional 200 jobs in Combilift and a further 200 construction related jobs.”

“It is growing and dynamic Irish companies like Combilift which are driving a recovery across Ireland’s regions. Combilift’s new €40 million facility in Monaghan will make a profound difference to the local economy and the national export economy.”

Minister for Jobs Richard Bruton, who has been accompanied by Combilift on several Enterprise Ireland trade missions around the world since taking office, said: “This is a great boost for Monaghan and the North East region, and a great example of what we are trying to achieve with our plan.”