Favourable exchange rates were worth €218m to the Irish company 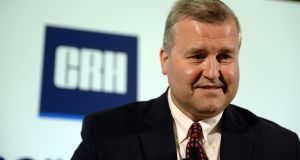 CRH chief executive Albert Manifold acknowledged that, while the stronger dollar and lower energy costs did have an impact, they also led to customers seeking better prices. Photograph: Cyril Byrne

A strong dollar and weak energy prices aided building materials group CRH’s performance last year, and the early indications are that these tailwinds will keep blowing this year.

Group transformation director Maeve Carton estimated that favourable exchange rates were worth €218 million overall to the Irish company. “That was mainly the result of the stronger dollar.”

Ms Carton noted that between 2014 and last year the US currency moved to about $1.11 against the euro from $1.33. “It is still around that $1.10 rate,” she said, adding that it was unlikely to shift significantly this year, although she did point out that currency movements were hard to predict.

Its American businesses, which are mainly focused on the US, contributed €917 million to its €1.27 billion operating profits in 2015. Its biggest division, materials, which produces asphalt, concrete, stone and paving, contributed €611 million alone.

That business benefitted directly from lower oil prices as a by-product, bitumen, is a key ingredient in asphalt.

Lower energy costs generally were also factors in CRH’s performance in 2015. Oil began the year at more than $50 a barrel, but fell steadily to the point at which it is now around $35 to $36.

Chief executive Albert Manifold acknowledged that, while the stronger dollar and lower energy costs did have an impact, they also led to customers seeking better prices.

According to him, increased sales ultimately improved the company’s profits.

Mr Manifold explained that as CRH’s costs were fixed, each tonne of stone that its operations process goes straight to its bottom line.

He stressed that while the dollar exchange rate and lower energy prices benefitted the group, the performance of its existing businesses and those acquired last year from Lafarge Holcim drove most of its growth.

1 Solar panels: How do they work - and are they worth it?
2 Bank leaked my loan request to family who tried to rip me off
3 Longview seeks permission for 753 homes in Cork’s outskirts
4 When the Chemistry no longer works – the closing of a leading Irish ad agency
5 Revolut valued at $5.5bn after latest fundraising
6 Ryanair and Aer Lingus monitor impact of coronavirus on travel to Italy
7 Over $12m from sale of Walford handed over in Sean Dunne bankruptcy case
8 Packing company wrapped up in online, design and sustainability
9 Hibernia Reit lets remaining space in 2WML building
10 Can I see my father’s previous wills?
Real news has value SUBSCRIBE